Venus of Urbino (1534) by Titian is easily the most famous nude in art history and one of the most famous paintings by Titian. Its ultimate meaning is obscure even to the most knowledgeable Renaissance expert, but its primary theme is manifest: female sexuality.

She holds a posy of red roses in her right hand (one has dropped on the bed), which also displays a bracelet. Besides the ring on the little finger of her left hand and the earrings, this is the only decoration on a body given au naturel. A puppy is sleeping at the foot of her spacious bed while two women, possibly her maids, are rummaging through large Italian chests in the background, apparently in search of bedclothes.

The scene is indoors; a partition on the halfway register, occupying the left half of the space behind the Venus, serves to distance her from the maids, who are therefore placed in two separate parts of a lordly room. Large tapestries, with the classical motifs of plant candelabra, are seen on the right-hand wall. Beyond the window with a potted myrtle, an evening sky is declining into the night. The shape of a tree suggests a garden.

Titian’s Venus of Urbino is a self-conscious successor to the Dresden Venus, long attributed to his colleague and rival, Giorgione, to which painting Titian himself had contributed at the very least the background landscape and the sky. If the historians who deem the Dresden Venus primarily Titian’s work are right, with Giorgione perhaps contributing some details, then the first known reclining nude in Western painting is Titian’s, and the sequence of his naked Venuses begins sometime before 1510.

The landscape is absent in the Venus of Urbino. The scene is deeply intimate; we find ourselves in a lady’s bedroom as she reclines in the nude. Furthermore, this Venus does not have her eyes closed; she is looking our way with unmistakable interest. The strong structural line established by the black (originally dark-green) partition guides the eye down to the intersection of the hand with the pubis, the clear center of this composition.

The blackness behind her, the scarlet below her, and the creamy whiteness of the sheets around her highlight her horizontal figure in all its parts. Light sources are: from the front, off-center to the left, illuminating the Venus, and from beyond the partition from the left, as we detect from the shadows around the two maids.

It is simply unknown who the model for Titian’s Venus of Urbino might have been or who might have commissioned this nude. She may be Angela, the lover of Cardinal Ippolito de’ Medici, Titian’s employer. Titian certainly painted a female nude for the Cardinal in the early 1530s, but the latter may have never seen the painting before dying in August 1535.

The painting acquired the epithet “of Urbino” when it was inherited by Guidobaldo II della Rovere, in October 1538, when he became the Duke of Urbino. Guidobaldo is recorded beginning his mother for money, in the years prior to his inheritance of the duchy, for the purchase of a nude by Titian.

The painting has also been read as alluding to marriage. The connection, in that case, maybe to Guidobaldo’s own marriage in 1534, to the ten-year-old Giulia Verano. The painting may have also been intended to celebrate the consummation of that marriage, which, however, likely occurred some years later. If there is allegorical teaching encoded, it may have been directed at the young Giulia. It was customary for artistic works dedicated to newlyweds to contain a moral lesson regarding marriage.

A Venus covering her pubis is a classical trope signifying modesty. The red roses are a symbol of the goddess. Alongside the ring, the dog, and the earrings of a luminous stone, the moralistic meaning of the painting could be that a bride is to devote her physical beauty without reserve to the one man she marries, in the intimacy of their bed. She is also to remember that beauty is passing (roses) and that she ought to be pure in her soul (simple jewels and maidenly braids) and faithful (ring and dog).

Titian’s Venus of Urbino entered the de’ Medici possessions in 1631, when Vittoria Della Rovere, the last of her dynasty, married Ferdinando II de’ Medici. From 1694 it is certainly a fixed part of the collection that we find today at the Uffizi, where it has regularly occupied a prestigious site ever since 1736.

It is there that Jean-Auguste-Dominique Ingres copies it in 1821, that Mark Twain is ostensibly shocked by its shamelessness in 1880, and that Édouard Manet finds it in 1856. To him, it will serve as the inspiration for the famous and scandalous Olympia (1863), a perfect successor to the tradition of reclining female nudes that Titian had started.

Manet’s tribute is rightly the most famous, showing a modern Parisian Venus in a similarly suggestive pose and expression. In the 1770s, instead, the German neoclassicist, Johan Zoffany, portrayed it in his Tribuna of the Uffizi, where Titian’s Venus is seen in an emphatic position being regarded from up-close by eminent visitors to the Florentine gallery. In the great multitude of classical masterpieces calling for the viewer’s attention from all sides, the Venus of Urbino is still the most easily affecting vision of all. And it goes on – Paul Cezanne would later copy Manet’s version in A Modern Olympia in 1874.

Ingres’ copies, besides exerting an influence on their maker, also served as a basis for his sculptor friend, Lorenzo Bartolini, to create a sculpted version, Lying Venus (c. 1830). Shorn of all elements of context and displayed as a beautiful but modest woman on a bed, Bartolini’s Venus confirmed the essence of Titian’s vision. 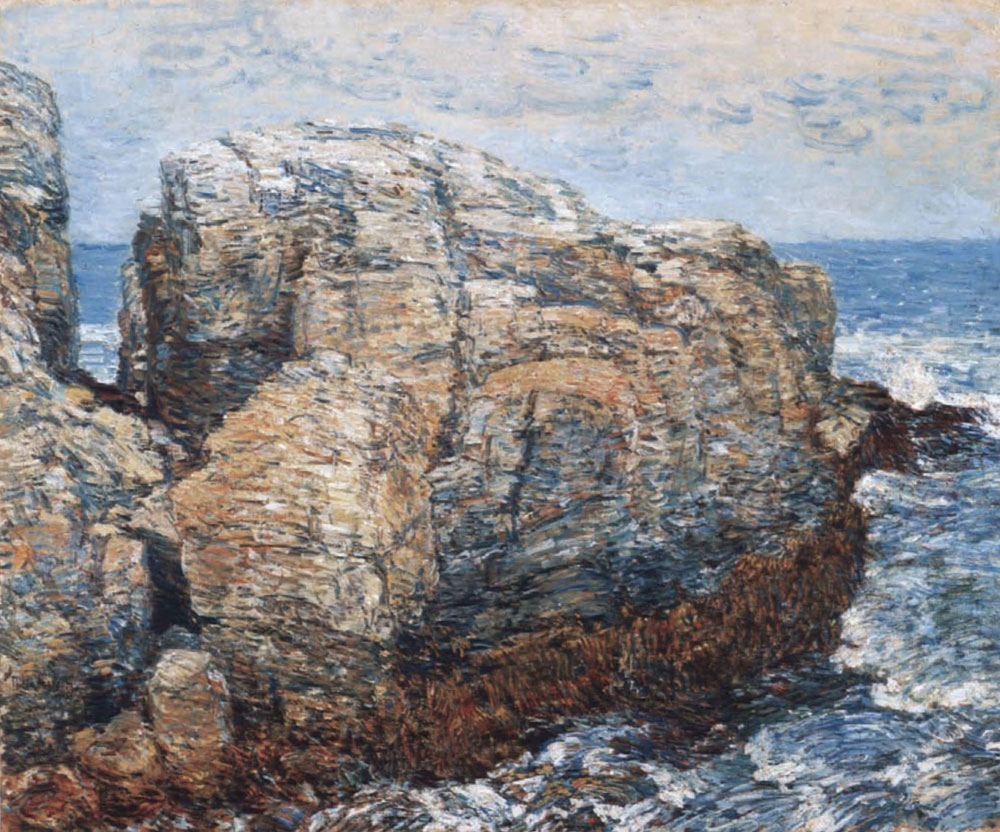 Sylph’s Rock, Appledore is a 1907 Impressionist painting by American artist Childe Hassam. This work is located in the Worcester Art Museum in Worcester, Massachusetts. […] 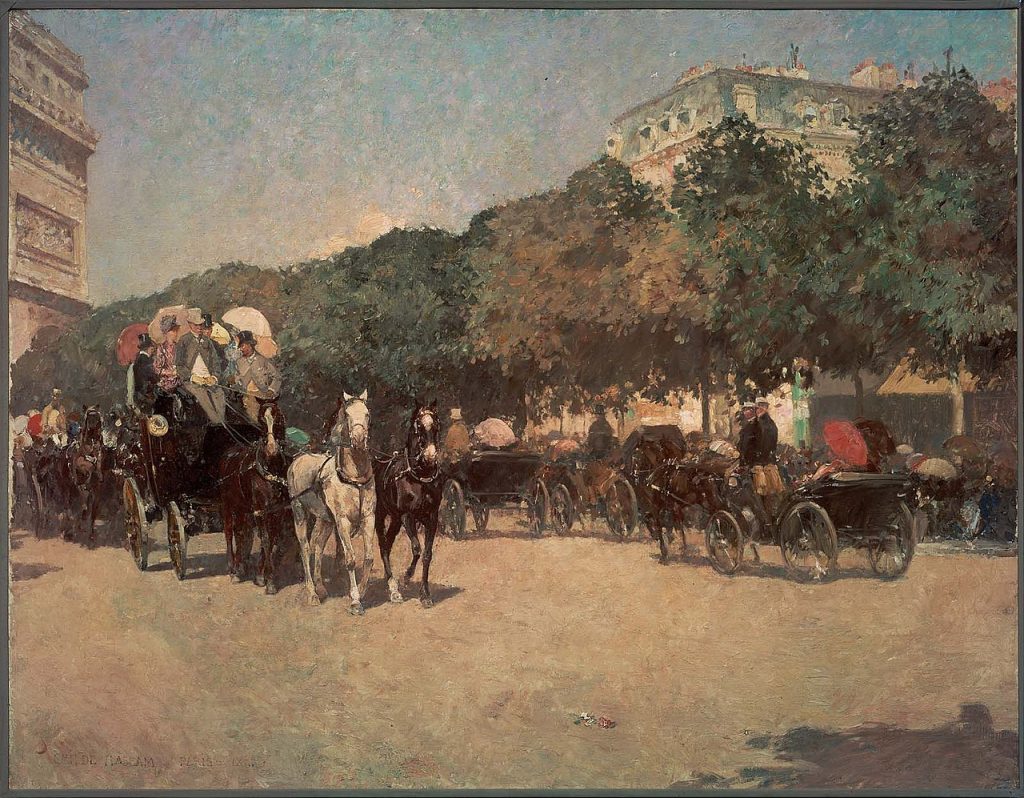 Grand Prix Day is an 1887 Impressionist painting by American artist Childe Hassam. This work is located in the Museum of Fine Arts in Boston, […] 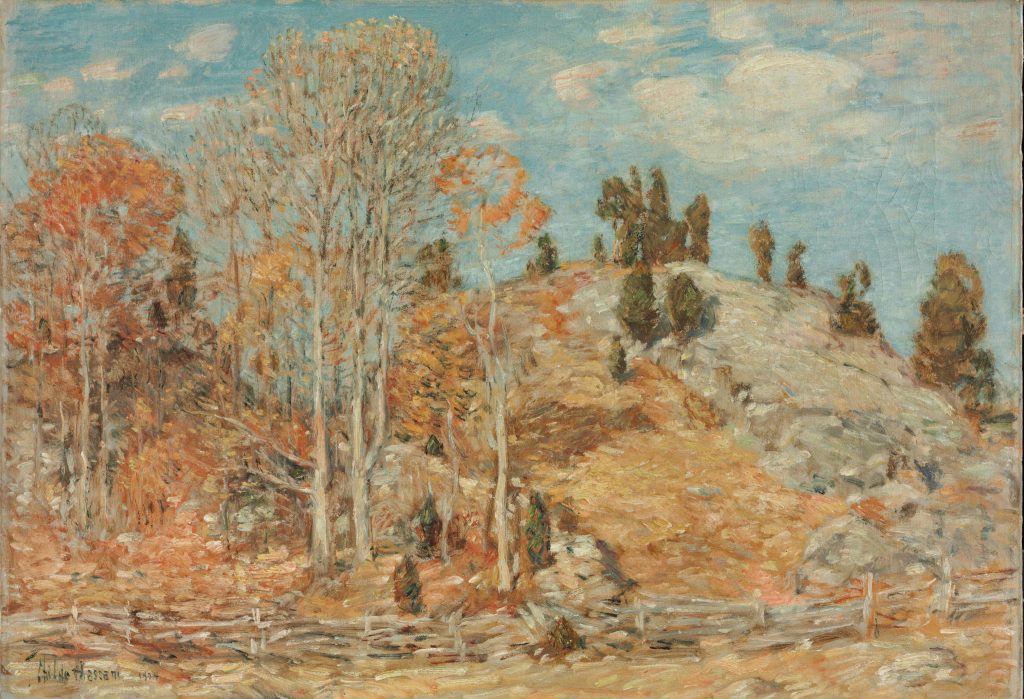