The Manet version caused outrage in its feature of a nude prostitute confronting the viewer with her confident gaze. Here Cézanne, in a looser style than Manet, shows the prostitute and her black attendant pushed into the background while a smoking man seated on a couch looks at them.

Cézanne’s focus seems to be on the act of looking, on desire, and perhaps allows the viewer a psychological distance from the man which Manet did not afford.

Cézanne painted this in 1874, eleven years after Manet’s original, which itself was inspired by Titian’s Venus of Urbino, from 1534.

In this dreamlike vision in vivid color, the allusive elements from Manet’s precedent are exchanged for more explicitly sexual equivalents.

In other words, we are left in no doubt, in Cézanne’s revision, that the reclining female nude is a prostitute.

When Édouard Manet’s Olympia was given to the public at the Salon of 1865, the scandal it caused was tied to the sexual effrontery of its naked female subject and the fact that fashionable Parisians could identify her as Victorine Meurent, known for being a sexually promiscuous model.

The stage had also been set by Manet’s Luncheon on the Grass of 1863, denounced by critics for identical reasons.

Cézanne takes up, one decade later, the entirety of Manet’s scene: a reclining female nude, a black maid who might be about to help her dress, a black cat symbolizing prostitution, and the slang word “Olympia”, which similarly stood for “prostitute”.

He then proceeds to make the fact of prostitution — indeed the plain dynamic of a male client attending a brothel where he is shown a naked woman — the subject of his painting.

By means of characteristically vivid pigments and through a more radical use of the Impressionist technique, Cézanne gives us a middle-class gentleman, his back turned to us, sitting on a couch inside a fancy interior, while a black maître d’ makes the spectacular gesture of uncovering the naked body of a woman who looks as if she is asleep.

The dreamlike quality of the scene resides in the two women standing on a surface that, billowy white and well above the client’s eye level (he is raising his head), resembles a cloud.

The drapes which appear to billow from the left add perhaps an impression of leftward moving air.

Here too we observe an allusive black cat. Its equivalent in Manet was barely visible on the right. In Cézanne, it is standing proud in the middle of the room sporting a red ribbon around the neck, as if to make a point.

It even appears that the black woman’s histrionic gesture of pulling back the veil is another precise reference to prostitution. It is probably a quotation of the classicist Jean-Léon Gérôme’s Phyrne before the Areopagus (1861), perhaps the most famous depiction in art of a naked prostitute.

According to some, the prostitute’s client awaiting so expectantly may be Cézanne himself.
Clearly, Cézanne sought to advance the thematic radicalism of Monet’s picture, of which he, alongside Monet and Émile Zola, had been an immediate admirer. The idea for the painting occurred to him in the midst of a debate on art.

Instead, the extent of Cézanne’s advancement in Impressionist decomposition by comparison with Monet can perhaps be appreciated by noting that only one object in Monet’s Olympia was truly disintegrated into tiny streaks of color: the bouquet.

At the time of Monet’s exhibition (1865), critics took a dim view of the apparently unfinished nature of that particular part of his painting.

A Modern Olympia was, decidedly, a critical fiasco. It was shown at the first Impressionist exhibition of 1874, itself a poorly patronized or appreciated event

Cézanne’s participation had been a cause of concern for some of the other artists beforehand for precisely those elements of his style to which A Modern Olympia gave an explosive expression: chromatic richness till the point of gaudiness and ill-considerate boldness of subject matter.

The painting belongs to Cézanne’s Impressionistic period. It thus stands in stark contrast to the naturalistic concern of his later development.

Paul Cézanne’s A Modern Olympia is in the Musée d’Orsay in Paris, France.

The May Dance: Jan Steen 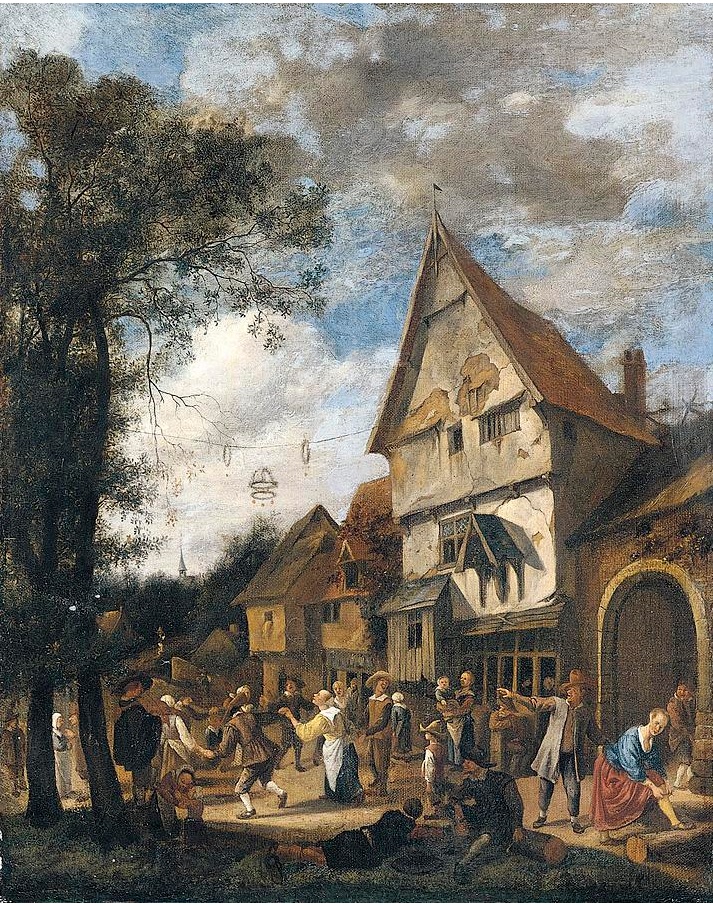 The May Dance is a 1647 painting by the Dutch Golden Age artist Jan Steen. This work is located in the Adolphe Schloss collection in […] 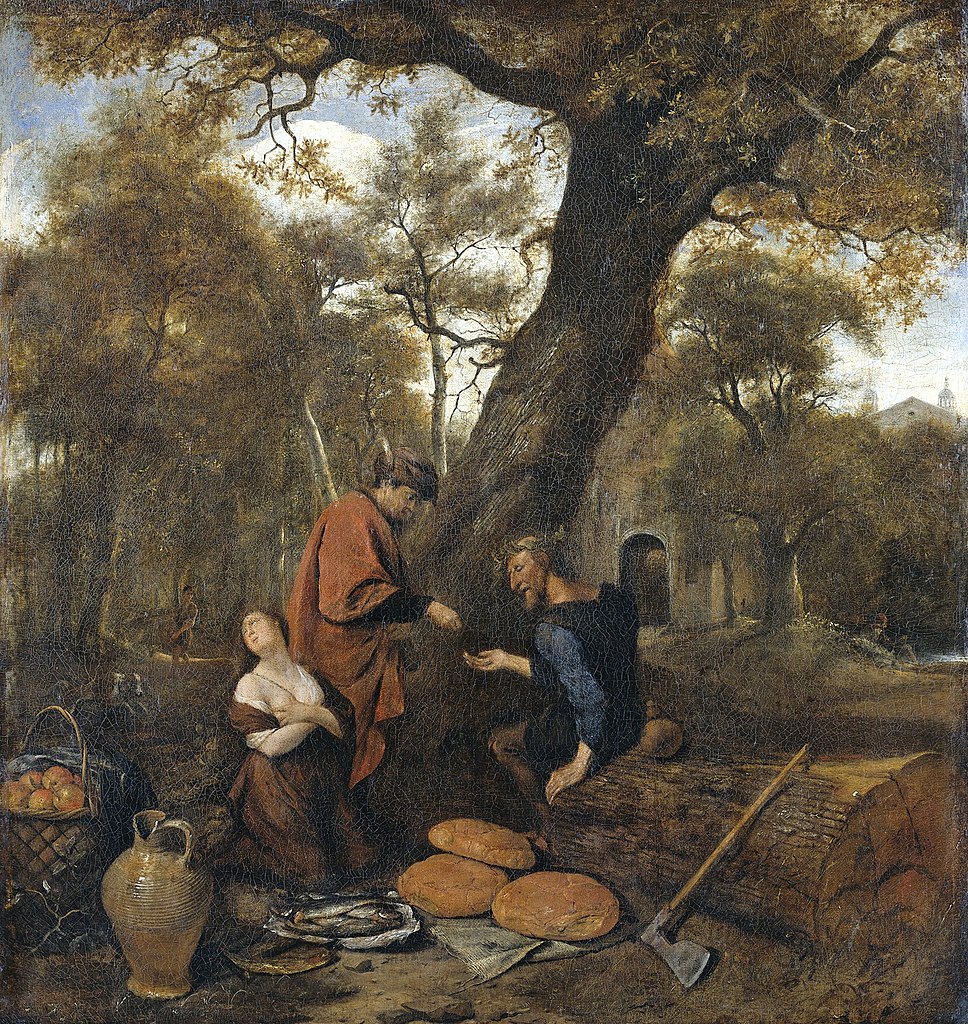 Erysichthon selling his Daughter is a 1600s painting by the Dutch Golden Age artist Jan Steen. This work is located in The Rijksmuseum in Amsterdam, […] 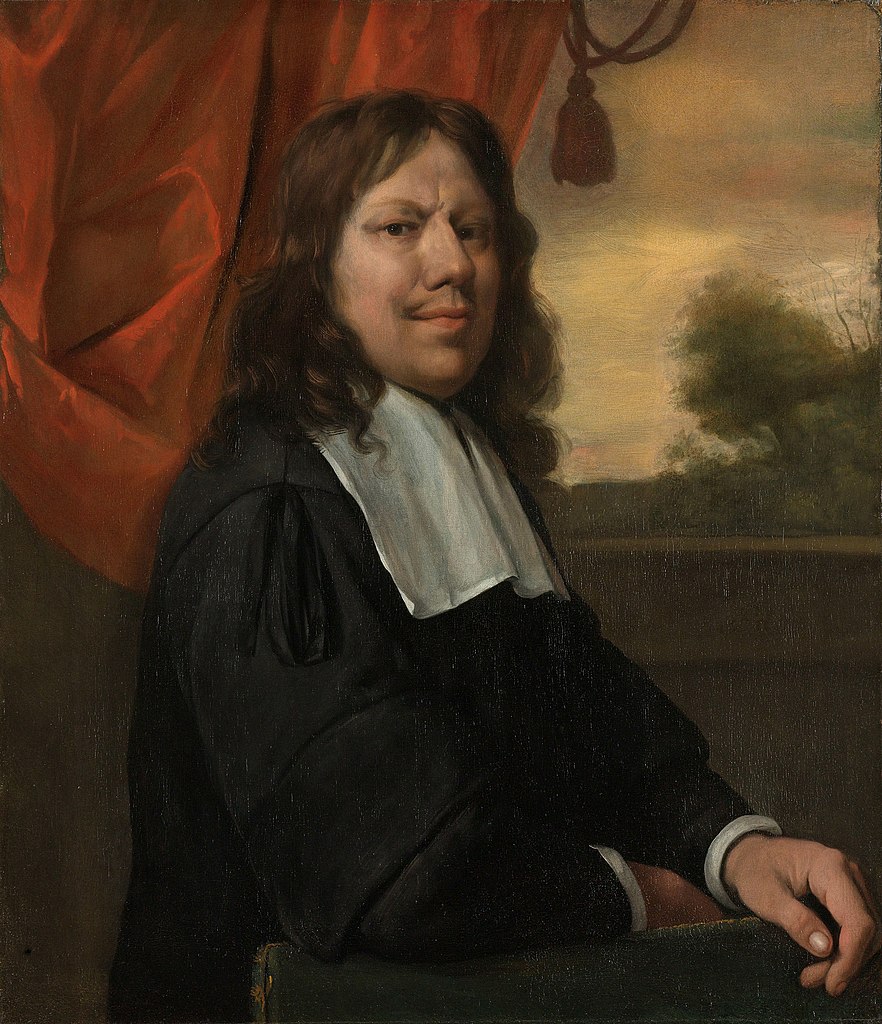 Self-Portrait is a 1670 painting by the Dutch Golden Age artist Jan Steen. This work is located in The Rijksmuseum in Amsterdam, Netherlands. More: The […]