Henri Rousseau (May 21 1844—September 2 1910) was a self-taught French painter of the so-called naïve and primitive style whose work influenced that of Pablo Picasso and the early avant-garde.

Notably disregarded as an artist in his lifetime, Rousseau is appreciated today by the critics both for his influence and for his peculiar technique.

Rousseau’s life was a modest one. His family was expropriated from their home because of debt when he was a teenager. He went on to study law, serve a tour of duty in the French army, and subsequently became a public servant.

As he finally became a tax collector for import duties in Paris, Rousseau was nicknamed Le Douanier — the customs officer — by the critics of his art.

Rousseau began showing his paintings to the public only in his 40s. He found his chance with the alternative Salon des Indépendants two years after its opening, in 1886. The Salon would become the home of, first, Fauvism (from 1905) — the style, with its masses of saturated stark colour, only apparently proximate to that of Rousseau — then Cubism (from 1911), and finally the Dada (from 1920).

Rousseau at the Paris Salon

At the Salon des Indépendants, in 1891, Rousseau displayed his first public work of art, Tiger in a Tropical Storm, an oil on canvas representative of his technique and his lifelong interest in imaginary tropical environments.

In 1905 Rousseau returned to the leonine and tropical theme by exhibiting The Hungry Lion Throws Itself on the Antelope, once again at the Salon des Indépendants, having been rejected from the official academic Salon.

It is possible that the critic Louis Vauxcelles, who unwittingly gave the name to the Fauvist movement by describing the 1905 exhibit as “Donatello among the wild beasts [les fauves]”, was affected by the juxtaposition of Rousseau’s painting to a sculpture in the Renaissance style placed in the same room.

In 1908, at the time of his primitivist explorations in art, Pablo Picasso organised a facetiously named Banquet Rousseau in his honour to which a group of emerging French and Spanish artists took part.

Having come to Paris to support the fledgling Cubist movement, Picasso had been deeply impressed by Rousseau’s simple and colourful technique. His own similar orientation towards uniformly coloured and geometric shapes showed in the contemporary Les Demoiselles d’Avignon.

As has been said, Henri Rousseau’s life was lived on very modest means. His small government pension was hardly ever supplemented by revenue from the sale of artworks. He is known to have taken up part-time jobs after his retirement and to have played the violin on the streets for some extra money.

Henri Rousseau had ostensibly never left France, despite rumours that he must have travelled to the tropics to paint many of his key works — perhaps during military service with the French expedition in Mexico in the 1860s — given his enduring interest for tropical settings.

The foreign flora depicted by him is therefore quite imaginary, rather than being simply unrealistic. His repertoire of ideas about the plants and animals from the regions closer to the Equator Rousseau likely gleaned from books, illustrations, and zoos.

It is worth noting that, although variously associated with Fauvism, Henri Rousseau was never a Fauvist painter. Compared to the Fauvist par excellence, Henri Matisse, Rousseau did not attempt any deeply subjectivist expression through colour. The often fantastic shapes in his works were not accomplished with a quick and instinctive application of paint; rather they were the products of cautious layering.

His rich colours are almost totally uncompromised by any tonal graduation. Rousseau’s style has been regularly described as “naïve” and “primitive”. Originally such designations were carried by a disparaging aim.

Today they are used to denominate manners of artistic expression which occur through, on the one side, extreme formal simplicity as is often due to lack of education, and, on the other, renditions of shapes that are in some way oriented towards the primordial human experience.

The primary reason that contemporary critics recognise the seedlings of the avant-garde in Rousseau’s imaginative paintings is precisely their fancifulness. His dreamlike assortments of shapes and movements are indeed suggestive of the subjectivist pursuits of the avant-garde, only unsustained by any immediately impressive technique.

It is as if Rousseau found complete artistic satisfaction in the well-rounded and richly coloured shapes of a different world, inhabited by thriving animals and trees but only ever peopled by a few and inexpressive human subjects.

Much more than with the Fauvists — with whom, as has been noted, Rousseau differed on the all-important question of colour — Rousseau finds his artistic continuators and superiors in the widely understood Avant-guard of the early 20th century.

He does not properly anticipate a style or a technique, but rather a disposition to make use of the canvas as a window into some part of the artist’s mind.

The expression that eventuates is one that accepts the surreal and that manipulates form and space in a most self-indulgent way. Rousseau baulked at any extreme development of the premises he had, perhaps to some extent unknowingly, set.

Aware of the difficulty which arises with purely imaginative compositions, Henri Rousseau would sometimes append short descriptions in verse. The Snake Charmer (1907), a rare commission, has a very suggestive female figure playing the flute while appearing, just like the snakes she is summoning, almost entirely blotted out by the source of light behind her. The painting negates a reassuring perception of a natural idyll due to the ominously darkened human subject and the surging reptiles.

In The Dream (1910), Rousseau has instead arranged an exceptionally crammed scene of beasts and foliage in the midst of which another darkened flautist is drawing the animals to itself while on the left a recumbent female (a lover from Rousseau’s youth) is recumbent and naked on a divan.

It is an emblematic Rousseauvian work, inlaid with exuberant plant life and the distinctive wide-eyed lions, but also one graced with the fleshly abundance of the female figure who is hierarchically central to the whole. The simplicity of her heavy shape may evoke the nude females of Paul Gauguin (see Aha Oe Feii: Are You Jealous? from 1892) or the many avant-garde experiments on the volumetry of the female body, such as Picasso’s Grande Baigneuse (1921). 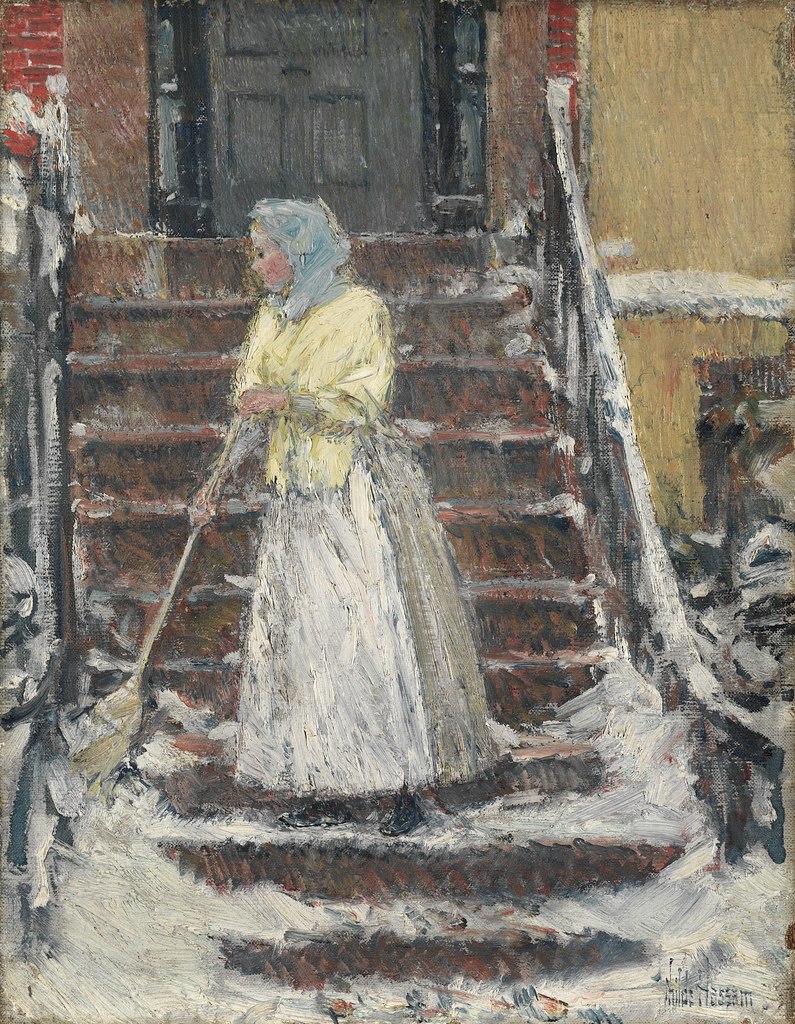 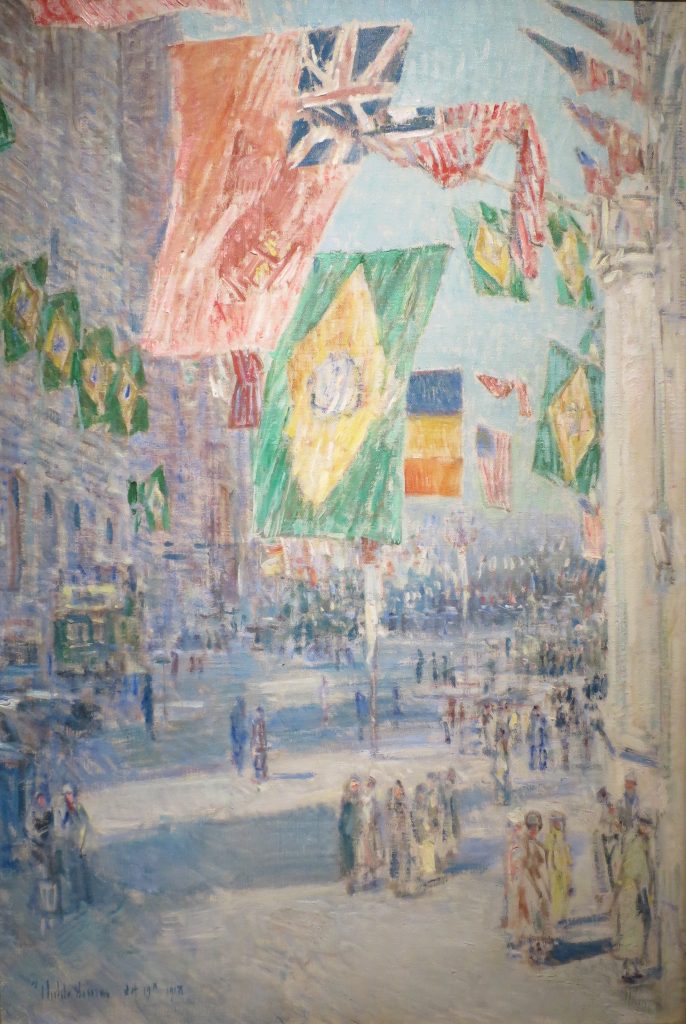 Avenue of the Allies: Brazil, Belgium is a 1918 Impressionist painting by American artist Childe Hassam. This work is located in the Los Angeles County […] 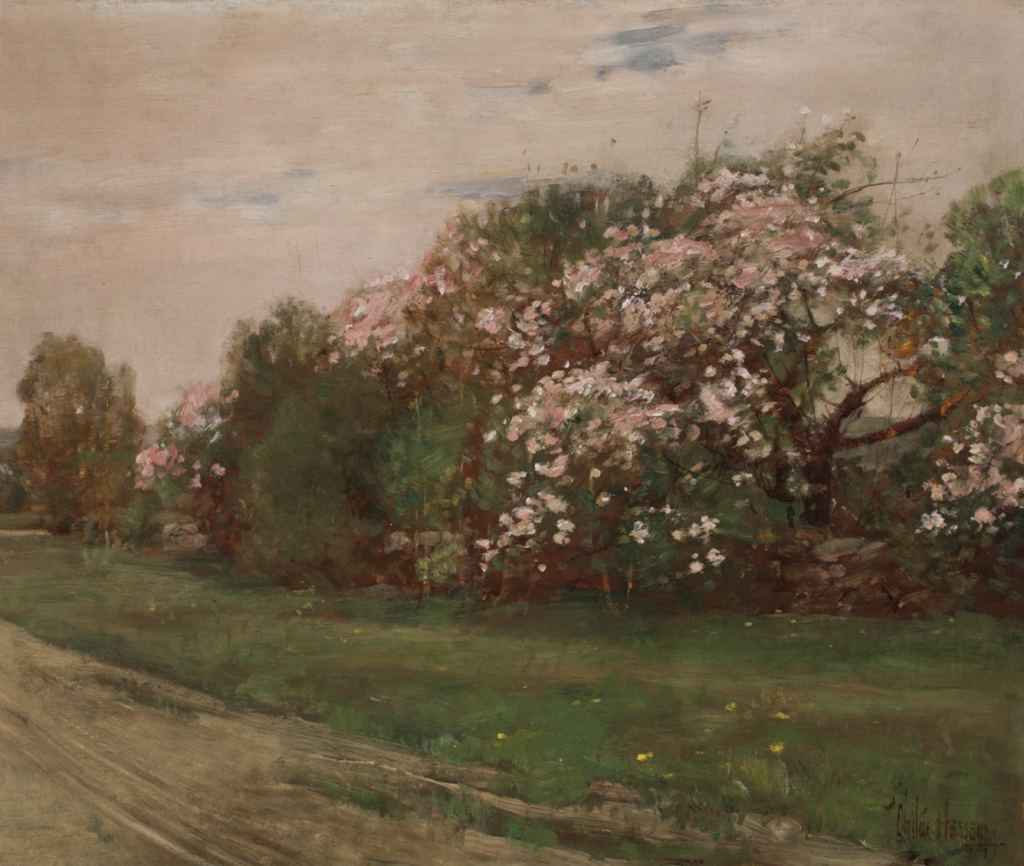