Paul Gauguin (1848-1903) is one of the great post-Impressionist painters. He was among the first to recognize the importance of non-Western art and his art was crucial in the development of art in the first half of the Twentieth Century.

Paul Gauguin (Eugène-Henri-Paul Gauguin) was born in Paris in 1848. His father was a liberal journalist, and his mother was of Peruvian descent. His father took the family to Peru for a better life, but he died on the journey. Gauguin loved Peru and its memories inspired him greatly.

He returned to France and joined the navy. Later he became a stockbroker and was phenomenally successful. He led a conventional lifestyle, but he was enthusiastic about art, and he studied it and began to paint in the 1870s. He became acquainted with a number of post-Impressionist painters including Vincent van Gogh.

An economic crisis ruined him, and he and his family were left in poverty. In 1882 His marriage collapsed after he and his family moved to Copenhagen. Gauguin returned to Paris and became a full-time painter, but his works were savaged by the art critics. The painter lived and work in several artist colonies because of his poverty.

His father was Clovis Gauguin, and his mother was Aline Marie Chazal Tristán. Gauguin’s maternal grandmother was the great feminist and social activist Flora Tristán. He married Mette-Sophie Gad, Dane and they had five children. Later in Tahiti, he fathered a number of children.

Paul Gauguin is considered to be one of the Four great post-Impressionists. He used line and color like the Impressionist but not to reproduce a scene but in order to evoke a feeling in the viewer.

As his career progressed his images became more flat and many of his scenes can be considered to be deliberately primitive. His proficiency in color and tonal harmonies allowed him to create more fully rounded figures and to develop graceful lines.

Gauguin also used elaborate formal decoration and coloring, and this helped to create vital canvases that have a life of their own. Gauguin had little interest in classical perspective or shades of color and sought to balance color and form for effect.

Gauguin was never formally trained or went to art school. He was instructed in his art by the great Impressionist Camille Pissarro and also Edgar Degas. 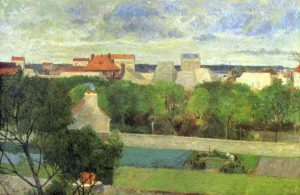 Gauguin’s first major painting was the Market Gardens of Vaugirard (1879) whihe he painted at age 31.

How many paintings did Gauguin create?

The artist painted 516 paintings over a forty-year period. This is remarkable given that he also created a number of other artworks such as woodcuts, sculptures, and prints.

The French painter was deeply influenced by the Impressionists. Later he came under the influence of the Primitivism school, which appreciate the art of Indigenous people which he used as part of his artistic manifesto which was a rejection of the materialism of Western culture. The painter was also fascinated by Japanese Art. These influences helped him to develop his unique and luminous style.

Paul Gauguin was very well traveled. As a boy he lived in Peru and as an adult lived in Copenhagen. He lived in a number of artist colonies and later moved to the Caribbean Island of Martinique and moved to the Pacific Island of Tahiti. He finally settled on the remote Marquese Islands in the South Pacific. He painted dozens of paintings during his travels, particularly in Tahiti which he would later take back to France.

Gauguin worked with many artists including Camille Pissarro and Vincent Van Gough.

Gauguin remains an extremely polarizing artist in art history, the French artist was always in trouble. He constantly fought with Vincent van Gogh in Arles when the lived together in The Yellow House and many historians believe that it was Gauguin who actually cut off van Gough’s ear. However his most controversial traits relate to his two trips to Tahiti, where he was in child-bearing relationships with underage local women, many of which are depicted in his artwork. 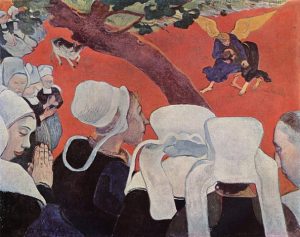 His first real masterpiece is the Vision After the Sermon (1888) which depicts a scene from the Bible where Jacob wrestles an Angel. Religious paintings were somewhat common for Gauguin throughout his career.

Among his other well-known paintings are the Green Christ, The Guitar Player, Night Café in Arles, and Girls Dancing. His paintings from his time in Tahiti are among the greatest post-Impressionist works such as ‘When will you Marry’ and ‘Where do we come from? what are we? where are we going?

Gauguin became friends with Vincent Van Gough, and they painted together in Arles, France until they quarreled after which the Dutch painter cut off his ear.

After this Gauguin was destitute but he was able to move to first Martinique and later Tahiti. He became involved with several local women and also local affairs, and he became a controversial figure.

During this period, he was inspired by the people and the islands to paint some of his greatest works. Many of his works are inspired by Indigenous art and beliefs. Gauguin returned to France, but his paintings were not well-received, and he returned to Tahiti.

By 1900 the painter was angered by the growing Westernisation of Tahiti and decided to move to the remote Marquese Islands where he built a house that he believed would be a total work of art.

Gauguin died alone and almost forgotten in 1903 at age 54 in French Polynesia. Gauguin’s health deteriorated very quickly probably because of syphilis. It was thanks to several admirers that his work came to be appreciated, most notably art dealer Ambroise Vollard who was connected to a number of his contemporaries such as André Derain, Aristide Maillol, Georges Rouault, Louis Valtat, Pablo Picasso, Paul Cézanne, Pierre-Auguste Renoir and Vincent van Gogh, among others.

Nafea Faa Ipoipo (When Will You Marry?) sold for a remarkable $240 million in 2014 from the Rudolf Staechelin heirs to the State of Qatar in a private sale, which was at the time a record price for a work of art. Otahi was sold for $140 million in 2013 to Russian collector Dmitry Rybolovlev from art dealer Yves Bouvier. Te Farewas also was transferred between the two earlier in 2008 for $107 million. Gauguin’s works often sell in the $10 million and upwards range.

After Gauguin’s death, his work eventually became highly influential. Among the artists he influenced were Edvard Munch and Henri Matisse. His work was much admired by the German Expressionists. Many scholars see the influence of Gauguin on the evolution of Cubism. The French artist did much to popularize non-European art.