These are the 12 most famous paintings by Georges Seurat. Seurat (1859-1899) was a painter and the pioneer of the Neo-Impressionism school of painting in the 19th century. His technique of depicting the movement of light using small brushstrokes of contrasting colors became known as pointillism.

A Sunday Afternoon on the Island of La Grande Jatte (1886)

Certainly, one of the famous paintings by Georges Seurat, and also one of the great works of art history, this painting depicts people sitting in a suburban park on the island of La Grande Jatte in the Seine River. There are three dogs, eight boats, and 48 people. This artwork was the first to be completely painted in the pointillist style, and it was at the forefront of both Seurat’s innovative painting method and the Impressionist movement.

This painting represents La Grande Jatte, an island in the Seine River just beyond the city gates of Paris. The basic sense of the environment, including the river itself, as well as the vertical lines of the trees, impressed Seurat. This artwork was created in the Pointillism style, which was a forerunner to modernism and one of the first Neo-impressionist art styles.

This painting depicts the Circus Corvi’s parade, or sideshow, at the annual Gingerbread Fair, which took place in eastern Paris around the Place de la Nation. To encourage people to buy tickets, free sideshows were performed outside the circus tent. This is Seurat’s first night painting and the first to represent popular amusement.

This painting depicts the island of La Grande Jatte, which is surrounded by trees, and the red-roofed houses of the Paris suburbs of either Asnières or Courbevoie across the Seine. A pattern of small brush strokes made with proper effort covers the surface of the painting densely but not evenly. With his other elaborate works, Seurat had previously highlighted this part of the river.

This painting depicts a woman and a man dancing the chahut, or cancan, a risqué dance of the time in which the women lift their skirts and shake their legs in the air. “The Can-can” is also known as “Le Chahut.” Despite the colorful subject, it is a well-planned painting, not a transient scene from Parisian nightlife.

This painting depicts a female circus performer standing on a white horse and performing many other acts at a Paris circus. Cirques and entertainment spectacles had been a popular subject for artists depicting modern life in the period. “The Circus” was Seurat’s final painting, a Neo-Impressionist work that he left unfinished when he died. The Circus is considered to be a masterpiece and one of the famous paintings by Georges Seurat despite not being completed.

This painting depicts a young model, Madeleine Knobloch, who is Seurat’s mistress and the mother of his two boys. The painting takes on a highly personal significance for the artist. Small dots of pure color juxtaposed in varying concentrations and intensities are used to modulate light and shadow on the wall. Seurat’s pointillist style is brilliantly demonstrated in this artwork.

This painting depicts a scene of hazy tranquility, lacking the usual movement associated with coastal views. The feeling of peacefulness that comes with a bright, sunny summer day is nicely captured. The artwork is often recognized as the beginning of the Post-Impressionist style, which contrasts with Impressionist art’s blurred, free-flowing brush strokes.

This is a painting of the same model standing and sitting in three distinct positions, completely naked. “Models,” is also known as “The Three Models and Les Poseuses.” This painting is notable for its pointillist style as well as the political implications of its depiction of a naked female body.

The Channel at Gravelines, in the Direction of the Sea (1890)

This is a painting depicting a fishing boat sailing into the channel, as well as others parked along the banks. In a fairly easygoing approach, the painting depicts the life of a late nineteenth-century French fishing port. Despite the fact that this painting is oil on canvas, it helps to capture the viewer with an extremely pastel impression.

This is a painting depicting a peaceful Parisian riverfront landscape in the suburbs. Isolated people, with their clothes strewn sculpturally on the riverbank, are depicted in a formal layout alongside trees, boundary walls, buildings, and the River Seine. “Bathers at Asnières,” is also known as “Une Baignade, Asnières.” This painting is the first of two large artworks by the artist.

What famous paintings by Georges Seurat do you think we should add to this list? Comment below. 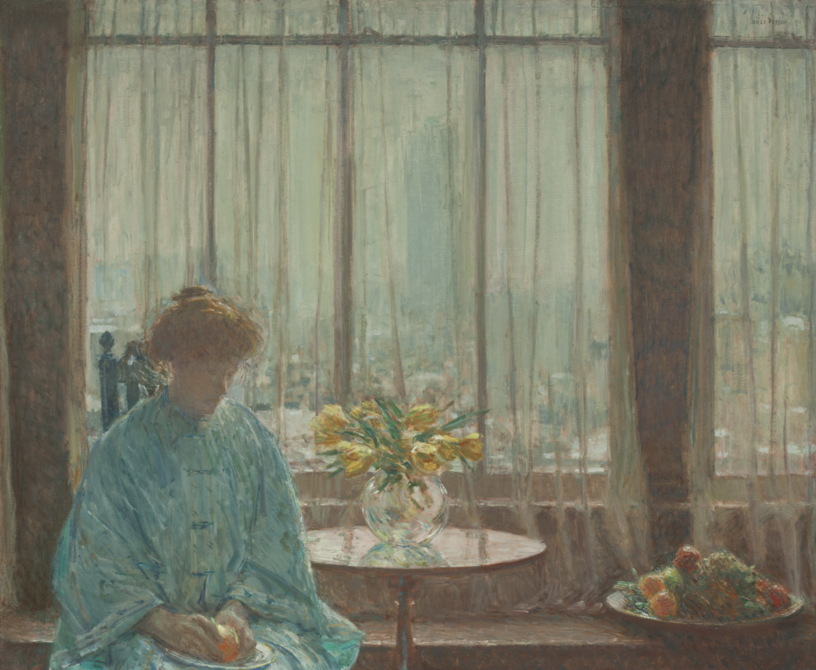 The Breakfast Room, Winter Morning, New York is a 1911 Impressionist painting by American artist Childe Hassam. This work is located in the Worcester Art […] 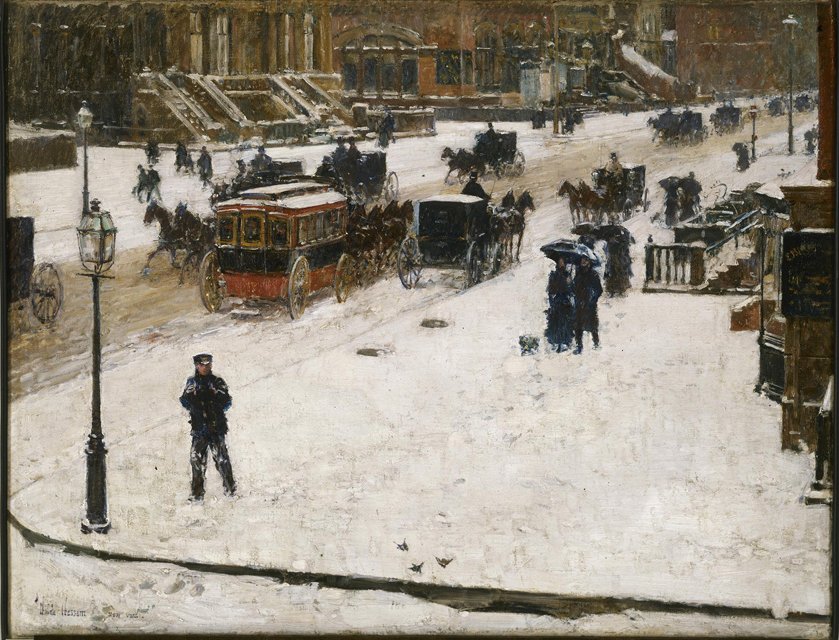 Fifth Avenue in Winter is an 1892 Impressionist painting by American artist Childe Hassam. This work is located in the Carnegie Museum of Art in […]

Distant Valley, Montauk is a 1924 Impressionist painting by American artist Childe Hassam. This work is located in the Ulrich Museum of Art in Wichita, […]