Titled Young Sick Bacchus because of the jaundiced appearance of the mythical subject, likely modeled upon the Caravaggio’s own reflection at a time of illness displays the young artist’s earliest known engagement with the peculiar Bacchic theme which he would repeat a number of times throughout his work.

It displays the distinctive dark-chamber composition of areas under light contrasting with black surroundings.

The figure of the Roman god of wine and revelry is represented through his classical attributes of youth, the crown of ivy on his head (not grapevine, as was more common), and grapes. The painting is a significant precursor to the more celebrated Bacchus of c. 1596, in which the selfsame traits appear but alongside ripe fruit and wine. The Bacchus in that case is, of course, depicted in full health.

This recognizably classical subject strikes us at once as peculiar. The young god is looking at us sideways, with a strange expression on his face. The natural gifts that signify his power are scarce on the scene — two bunches of skimpy grapes, one dark, one white, two sallow-looking peaches — and he looks decidedly unwell.

His complexion is particularly yellow and his lips are livid. He is sitting at a table that might as well be made of rock — there is no sign of comfort. His legs are crossed; he is not reclining sedately like his twin from 1596.

Young Sick Bacchus is probably a Caravaggio self-portrait, due to the apparent illness of the figure we see, at a time when the artist is documented as having been ill; but also because of Caravaggio’s well-known habit of using a mirror to paint himself into his subjects. This was due in part to his penury, which precluded the possibility of commissioning a model to sit for him.

It may also have been a choice induced by the realization that a looking-glass creates an excellent frame around an individual subject, besides being of course a naturalistic representation in itself, a principle to which Caravaggio was clearly devoted. This point was expounded by da Vinci in his treatise upon painting, which Caravaggio was likely to have known.

The naturalism of this Bacchus afflicted by some malaria-like illness, and bearing its signs all over, has allowed contemporary scientists to make detailed hypotheses on the basis of the symptoms that the artist so carefully arranged for them five centuries prior.

Young Sick Bacchus is indeed painted during the period of Caravaggio’s fixation upon the authentic detail of the human world as he could touch it and see it. The pieces of fruit that he relied upon, if not purchased at a bargain price at the street market, could have been picked up as castoffs at a tavern.

Painted at the apogee of the Chuch-led Catholic Counter-Reformation, Young Sick Bacchus appears to historians as a testament to its age. The Bacchus that it envisions — a symbol of well-being and sensory gratification — seems to allude to disillusionment, hedonism, and possibly with life. The god of pleasure is ill, possibly in pain, and his gifts are meager and unappetizing.

This is the Christian theme of vanitas — vanity of earthly things, their ephemeral nature, and ultimate decay. Again by comparison with the Bacchus of 1596, Young Sick Bacchus depicts no wine on the scene, and thus no reference to the possibility of incarnating the spirit of Bacchus.

Indeed, the Bacchus we see is likely not one we wish to partake in at all. Interestingly, there is also no feminine softness in the face of this Bacchus and thus no intimation that he is a perfect creature because of his hermaphroditic nature (an alchemic concept).

If the common parallel between Bacchus and Christ is considered, the Bacchus we are looking at can only correspond to the suffering Christ. The Christ of the Passion, in other words, as grapes prefigure wine.

But, just like Christians are likely to see a redemptive promise in the ostensible defeat represented by the Passion of Christ, so Caravaggio may have encoded in his Bacchus a deep optimism about life in defiance of his illness.

The peculiar posture, suggestive of potential movement, is to be found in Michelangelo’s iconography, but also in the figures of Bacchus painted by Simone Peterzano, Caravaggio’s master in Milan. To put it another way, we must not, in looking at the god of revelry afflicted by transitory illness, fail to notice that he is smiling. It is a smile free from anger or resentment.

Young Sick Bacchus, whose title is a posthumous attribution of critics (a translation of the Italian Bacchino malato), may have been an attempt by the artist to showcase his ability with still life, classical subjects, and contemporary pietistic themes. It was painted at the beginning of Caravaggio’s career, shortly after his arrival in Rome, which may have occurred in 1592.

There was a high demand for cabinet pieces of this kind: single-subject paintings without a great deal of spatial context and which could therefore be fitted neatly into furniture assemblies. At the time, the expanding Roman aristocracy was in great need of decorations for its rooms.

This painting, together with a Boy with a Basket of Fruit and Boy Peeling Fruit, both of the same period, were confiscated from Cavalier d’Arpino, Caravaggio’s Roman master, by the Papal State in 1607 for failure to pay tax.

Now in possession of Pope Paul V, the painting was passed on to Cardinal Scipio Caffarelli-Borghese, an art collector and the pope’s nephew. It thus became a permanent part of the famed Borghese Gallery in Rome, Italy. 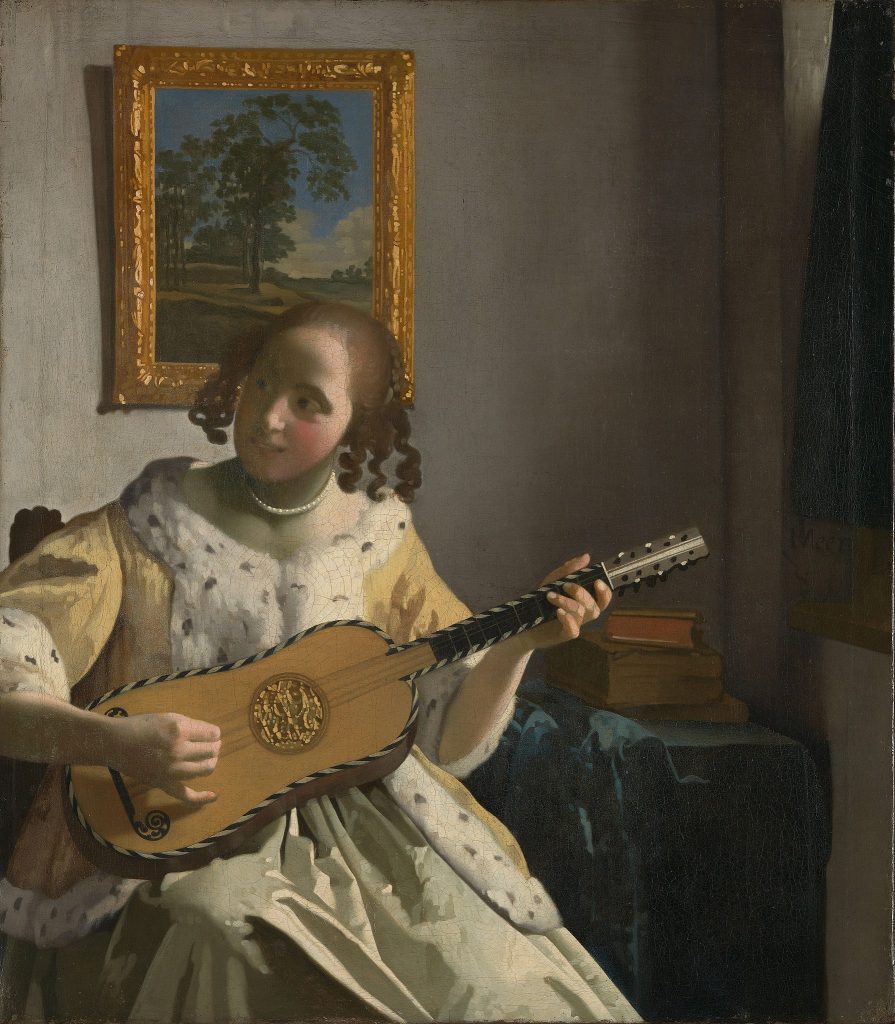 The Guitar Player is a genre painting by Dutch Golden Age artist Johannes Vermeer. It was created in 1672. This work is located at Kenwood […]

The Madonna of the Carnation: Albrecht Dürer 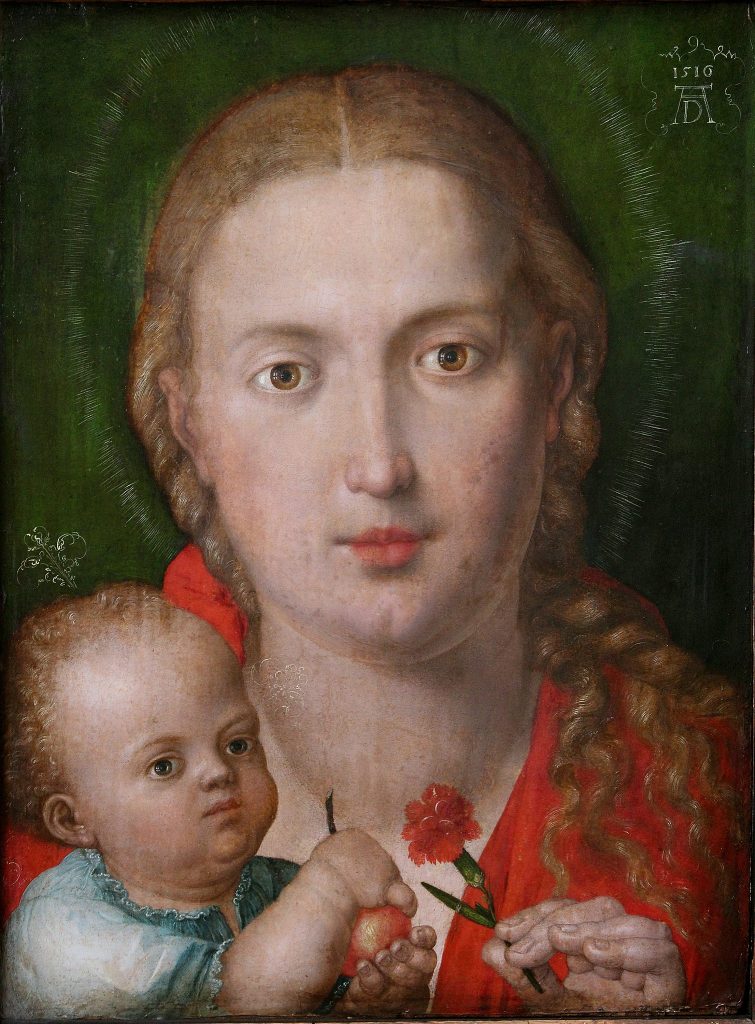 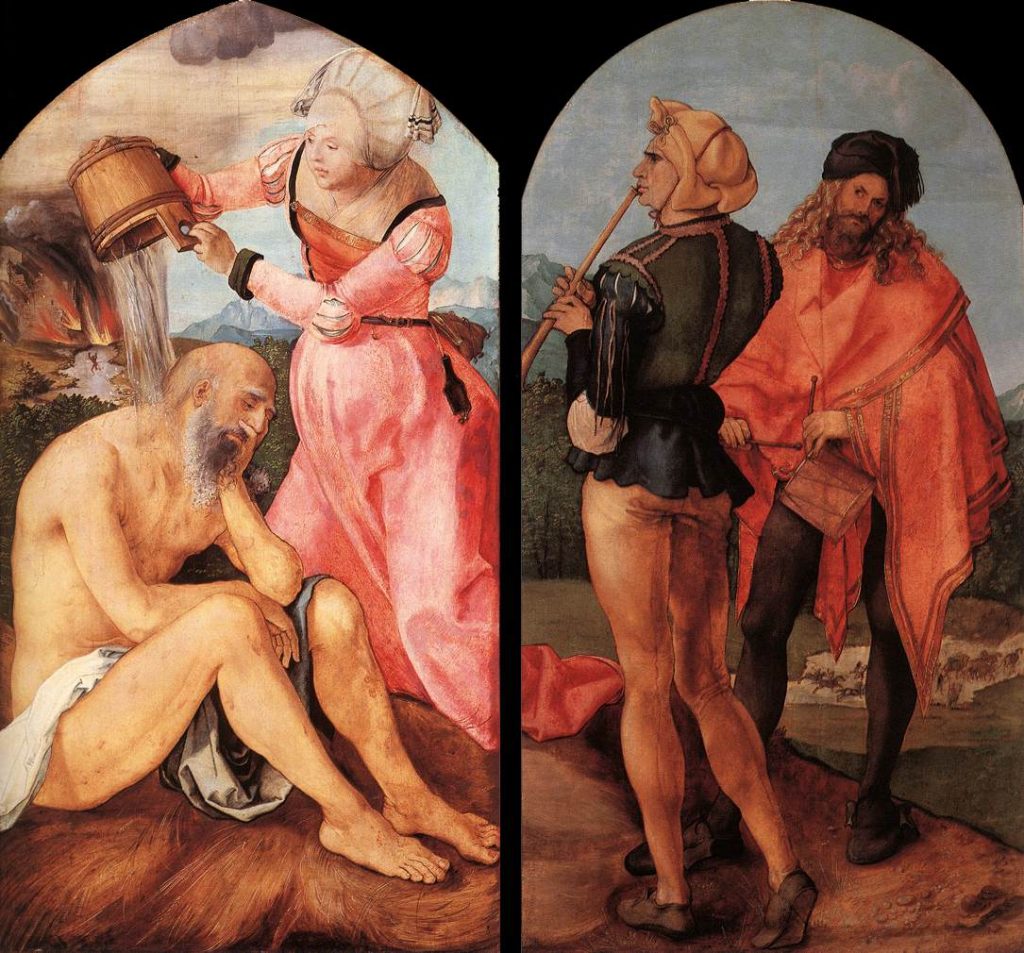