The Rape of Europa is a 1562 Mythological Renaissance painting by the founder of the Venetian School, Titian which belonged to a mythological series that he called ‘poems’.

The Rape of Europa depicts Europa, a Phoenician princess of divine descent, whose tale was popularised by Ovid’s Metamorphoses but which likely originated in archaic Greece (8th-6th century BC). Its first appearance is in Homer’s Iliad.

The mainstay of Europa’s story — there being many variants and that of Ovid being particularly creative — is that she was kidnapped by Zeus, the father of the gods, and taken to the island of Crete. Zeus accomplished this royal abduction by appearing in the guise of an elegant bull while Europa and her maids were tending to the king’s herds and collecting flowers. Europa, fascinated by this exceptionally tame animal she had not seen before, caressed it and proceeded to climb onto its back.

Zeus, who (in the mythological telling) desired her because of her beauty, leaped up and dashed toward the sea with Europa on his back. He then continued his run across the water and carried Europa, an aristocrat of supposedly Greek origin, from the coast of Asia Minor to Crete.

Europa became thereafter the first Greek queen of Crete. Anthropologists, encouraged by the attempt of Herodotus (5th c. BC) to uncover the myth’s rational foundation, suspect that the narrative may in fact be a popularised version of a Phoenician religious tale or a long-forgotten political event among the Greeks.

The common designation ‘The Rape of Europa’, just like those of ‘The Rape of the Sabine Women’ and ‘The Rape of Lucretia’, mimick a Latin usage of the term rape, one which did not distinguish kidnapping from rape itself when it involved men and women. Though the mythical tale undoubtedly implies sexual violence following upon the abduction, the traditional focus of the tale — as in this painting — is the act of abduction itself.

Titian’s depiction of this violence centers upon the moment when Europa is already being carried off by the god and her maids, standing on the shore to the left, arms in the air, are having one last vision of their lady. Titian chooses to lay the stress on the sexual nature of the aggression: Europa’s white clothes are slipping as she ostensibly struggles for balance; her legs as well as a breast have come uncovered; her legs are peculiarly parted. Continuing the linguistic note above about the designation of this event, it should be noted that Titian saw it as a sexual ravishment even though the common Italian name that would have been familiar to him was Ratto di Europa — ‘the kidnapping of Europa’.

As she struggles on the back of Zeus, Europa holds in one hand a fluttering scarlet shawl which creates an obvious chromatic opposition with the rest of her white one-piece tunic. A lower, orange vestment appears to have fallen onto the bull’s backs at an earlier instant.

Similarly, the two maids we observe in The Rape of Europa on the shoreline in the distance are dressed, one in predominantly scarlet color and the other in white. The hues of passion and innocence are thus juxtaposed by Titian, a painter acutely aware of color, in a scene in which concupiscent passion is negating and violating innocence.

While the natural background in Titian’s The Rape of Europa is clearly fictional and does not evoke the shores of Phoenicia, Titian makes sure to clothe his figures, most visibly Europa, in proper Grecian attire: chitons (the tunics) and himation (the orange mantle).

The painting has a remarkable rightward dynamism created by the diagonal figures of the bull and his victims, the orientation of the three putti (flying infants with wings), the rightward inclination of the maids, and even the wild landscape — almost entirely contained in the lefthand side of the painting — which seems to incline that way.

Titian gives the scene a cold light established by the blue tones of the broad horizon behind the two main characters. The indistinct nature of the background and the shore evokes da Vinci’s equivalents. This very imprecision of detail belongs to the late Titian and is due to the mixing or ‘dirtying’ of colors all across the composition (a technique da Vinci explicated in his treatise), with the widest solidly colored areas belonging to Europa’s legs at the optical center of the painting.

Though Titian was certainly familiar with the myth from any number of sources, it appears that a direct influence has been that of Leucippe and Clitophon, an ancient Greek novel (one of five of its genre that has reached modernity) by Achilles Tatius of Alexandria. The text had been recently rendered into Italian. Its description of the fateful scene bears striking resemblance to that of Titian as regards such details as the clothing.

As noted, The Rape of Europa belongs to Titian’s ‘poems’: mythological scenes painted for sale and mainly intended as exhibitions of his skill. Having belonged to its commissioner, Philip V of Spain, the painting was passed on to Philippe II of Orléans. It was finally acquired by Isabella Stewart Gardner, the American art collector, in 1896. It is part of her collection to this day, in the Boston museum named after her.

Titian’s Rape of Europe is to be seen in comparison with Rembrandt’s Abduction of Europa (1632), a version sourced from Ovid only and thus radically different from Titian’s.
Titian’s painting has been recurrently instanced as a demonstration of the gendered specificity of colonialism.

With Europa becoming, happily, we might assume, queen of Crete cheered by a selection of magical gifts from her kidnapper, we have in this story an example of the ancient mythologies’ acceptance of violence as the creator force of polities.

Distant Valley, Montauk is a 1924 Impressionist painting by American artist Childe Hassam. This work is located in the Ulrich Museum of Art in Wichita, […] 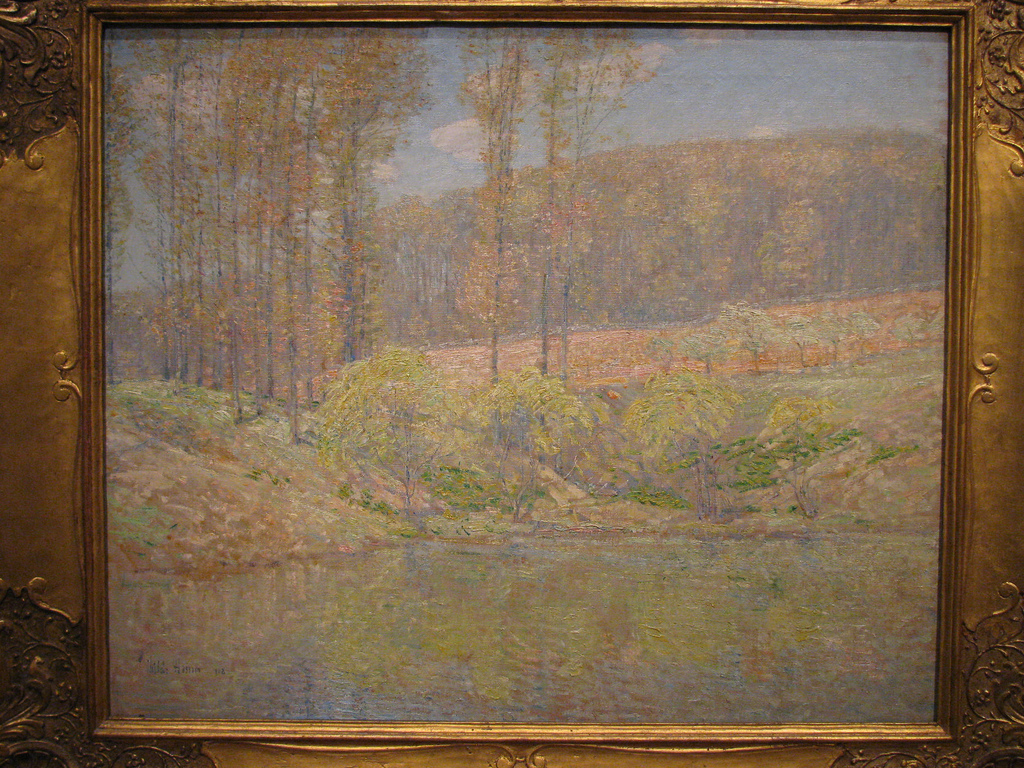