Auguste Renoir (1841-1919) was one of the greatest French painters of the 19th century. He was a pivotal figure in the development of the Impressionist School of painting and influenced art in the Twentieth Century.

Renoir was born into a poor family and was the son of a tailor. His family moved to Paris when he was young, and he grew up near the Louvre and this inspired his love of painting. The young Auguste was a talented singer, but his family was too poor to enable him to study music.

Later, he was apprenticed to a porcelain factory where he hands painted pieces but was later made redundant. His employer saw his potential and helped him to study art in Paris. Renoir soon made the acquittance of many eminent artists and soon became a member of the Impressionist School, which was seen as too Avant-Garde at the time in Paris.

The wealthy Le Couer family became his patrons and allowed him to paint at their estate in Fontainebleau until he quarrelled with them. Renoir’s career was impacted by the Franco-Prussian War (1870-1871), and he stayed in Paris during the Prussian siege.

His fame grew as he submitted paintings to the Paris Salon and Impressionist exhibitions. Auguste Renoir married his former model and settled down to live outside Paris.

He was the eldest son of Theodore Renoir. Renoir married Aline Victorine Charigot (1859 – 1915) and had a happy marriage. The couple had three children, including Pierre who went on to be a well-known actor (1895-1952), and Jean who was a director who created many masterpieces such as the Grand Illusions (1937). While Claude was a well-known ceramic-artists. Renoir’s grandson Claude’s son of Pierre was also a well-known director.

Pierre-Auguste Renoir’s style was characterized by the use of light and vibrant colours. He used light brushstrokes of colour for effect. He typically painted outside (en plein air) and painted subjects of everyday life. Among his favourite subjects were female nudes. Renoir combined traditional elements with the modern. His style can be characterised as one that was fascinated by colours.

Pierre-Auguste Renoir was taught by the Swiss artist Charles Glerye 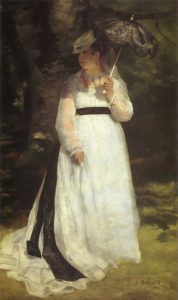 Renoir was a precocious talent, and his first great painting was painted at the age of 26. It was a painting of his then-lover. The painting now regarded as a masterpiece is called Lise with a Parasol (1867).

How many paintings did Pierre-Auguste Renoir create?

Renoir painted an enormous amount of workings, right up to his death at age 78. It is believed that he has created up to 4000 paintings.

Among the influences on Renoir were Eugene Delacroix and Watteau. His contemporaries were also important in his development such as Claude Monet.

After Pierre-Auguste Renoir became a successful artist, he travelled widely. He visited France and Italy to study the great masters, including Velazquez and Titian in particular. Renoir was fascinated by light and shadow, and he visited Algeria twice, to paint. Renoir also painted on the Channel Islands (United Kingdom). 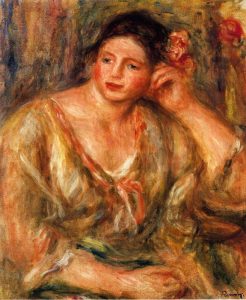 Several of Renoir’s paintings have been stolen including Madeleine Leaning on Her Elbow with Flowers In Her Hair which was stolen in 2011 and the location of the painting remains unknown.

The last painting by Pierre-Auguste Renoir is thought to be Les Baigneuses or ‘The Bathers’ which was painted between 1918 and 1919, the year of his death. The picture depicts two groups of nude women bathing and is notable for the two women in the front having unusually large arms and legs.

Most of his later years were spent in Cagnes-sur-Mer in the French Riviera of South-Eastern France. In the 1890s Renoir developed a series of health complaints. In particular, he developed arthritis and his caused him to lose the use of his hands which were frequently bandaged. This did not stop him from painting, and he continued to paint in his home outside Paris. An assistant would also often help him paint. Indeed, he produced several masterpieces at this time. Indeed, despite his health issues he also took up sculpture. Even in old age, he was experimenting with a variety of different techniques.

In 1919, Pierre-Auguste Renoir suffered a heart attack and passed away at his home in Cagnes-sur-Mer. Before he died, he visited the Louvre with his son and to his great pleasure saw his paintings hanging alongside the Old Masters that he so admired.

Renoir painted in a variety of styles. He was a master portrait painter as seen in his Portrait of Alfred Sisley and La Parisienne (1874). The artist also painted many landscapes such as the Pont-Neuf (1872). Renoir revolutionized the painting of nudes such as After the Bath (1888). The artist also created a number of important self-portraits.

Renoir’s paintings fetch millions at auctions. His paintings, like the other great Impressionists, are very much in demand. The record for a Renoir painting was for a smaller version of the famous genre painting Bal du moulin de la Galette (1888). This was for a time one of the globe’s most expensive paintings. It was sold for $78 million back in 1990 by American philanthropist Betsey Whitney to Japanese businessman Ryoei Saito. The painting has not been seen since its Sotheby’s, New York auction and its current whereabouts is unknown.