John Constable (June, 11 1776—March, 31 1837) is the great English landscape painter, one of the defining artists of the culture of the English-speaking countries, and a deeply influential presence for generations of subsequent painters, beginning with the Romantics and the Impressionists.

John Constable was born in Suffolk, South-West of England to a farmer family which had established a thriving trade in corn that was shipped to London.

John was thus raised in the midst of the celebrated English countryside and with the expectation that he would take over his father’s business upon coming of age.

Constable’s love for landscape manifested early and it was to be the foundation for the entirety of dedication to art. His only teacher in early youth is the professional artist John Thomas Smith who, while discouraging him from exchanging his family’s business with an artistic career, gave him lessons in Realism by telling him not to contrive objects that are not within the scene.

As John Constable’s almost exclusive subject and scene would be the English landscape, this naturally led him to regard the light and colour of a vision as the most important qualities to communicate.

John Constable and the Royal Acadamy

In 1799, Constable entered the Royal Academy as a probationer, which is to say a student, in order to be taught drawing, anatomy, and the great masters, of whose works he produced a multitude of copies.

His father acquiesced in his decision eventually but, like Smith, considered it a waste of a profitable career in the family business that he had begun.

In 1802, Constable was already offered a teaching position in a college, which he refused on the grounds that he intended to be a true-to-nature landscapist. He began exhibiting at the Royal Academy, his paintings already showing all the traits of his poetics: nature as seen by the individual subject from a particular viewpoint at a particular time; chromatic juxtaposition to suggest shades; spots of shining white where sunshine is touching the surface.

As one of the artists most attached to the reality of the natural world around them, John Constable was affected by the scenery of nature that he travelled to discover, all the while regularly returning to those defining visions of his idyllic childhood. He established a personal routine of spending winters in London and the summers in the countryside.

In 1806 he also visited the Lake District (North-West of England), while in 1811 he was in Salisbury for the first time in his life — both visions directly consequential for his art. As a source of income, he undertook portraiture (which he disliked) and the painting of private country houses, a gentlemen’s fashion of the time. The masterpiece Wivenhoe Park is an instance of a country house painting.

His marriage to Maria Elizabeth Bicknell in 1816 — a childhood friend and later a devoted wife — was bitterly opposed by the Bicknell family, who considered the Constable’s social standing too low and knew John to be relatively indigent. Maria was under threat of disinheritance for the several years of their courtship; eventually, the pair received a fifth of the Bicknell family business when the Bicknell seniors passed away.

In the months following his honeymoon, Constable is to be found on the southern coast of England, exhilarated at the spectacular seaside and engrossed by his largest landscape project to date — Flatford Mill — intended to achieve the spectacular effect of classical landscapes but with his own, until now underappreciated, luminous technique. It appears that the painting, exhibited at the Royal Academy, benefitted him only in terms of moderate praise.

Formal success as an artist

John Constable finally had his first commercial success in 1819 when he managed to accomplish his first sale (The White Horse, for a hundred guineas, to a friend) after which Constable enjoyed the first period of financial freedom in his adult life.

It also induced the Royal Academy to make him an associate, enabling him to begin his extraordinary ‘Six-Footers’ series, so-called for the size of their canvasses and most of them recognised Constable classics.

What followed was a steady trickle of commissions and purchases, but more importantly praise, recognition, and influence.

The Hay Wain, in some estimation his absolute masterpiece, was shown at the Academy in 1821. Seen by the Frenchmen Théodore Géricault and Charles Nodier, it left an indelible impression upon them and convinced them that a new way of portraying nature exited, quite independent from any imitation of the past (Géricault acknowledged a direct influence of this seminal vision upon his Massacre at Chios).

A year later, exhibited at the prestigious Salon of Paris, The Hay Wain was awarded a gold medal by King Charles X.

Despite his remarkable success in France — which at all times after 1822 surpassed all the attentions and sales he was accomplishing in England — Constable never wanted to travel in order to promote his work, let alone reside in a foreign country. His attachment to England was thorough.

From 1824 and for a period of four years, Constable is mainly located in Brighton, on the southern coast. His wife had begun developing tuberculosis and the supposedly healthier seaside air was expected to help her recover. He abandoned his orientation for the large-scale, having found the marine scenery less congenial to the format.

In November 1828, less than a year after the birth of their seventh child, Maria Constable passed away. For John, this signified the loss of previous warmth and the beginning of a decidedly bleaker phase in his life and artwork. His landscapes materialise his anguish spectacularly (see Hadleigh Castle), proving from a new vantage the spiritual connection upon which his artistry was based.

Formally the most distinguished period of Constable’s career began in 1829 when he was finally inducted by election into the Royal Academy, where he would soon begin teaching as a ‘Visitor’. As a teacher and lecturer, Constable could finally expound his theory of art as a mature doctrine the proof of which he had had to supply personally over decades of works

The love for John Constable (and his fellow Englishman and landscapist JMW Turner) which first the Romantics and then the Impressionists manifested was due to his mission of representing through painting the individual person’s perception of scenery which is known to be ever-changing, particularly in its permutations of light.

Yet Constable was also expressly concerned with the possibility of a scientifically accurate rendition of perspective and shape, indeed he believed in the philosophical (which is to say scientific) study of painting.

This obvious fact makes it impossible to forget that he (as well as Turner) was in fact an English landscapist, relatively inured to the philosophical and political gales of the Continent. He stressed the conjunction of imagination and truthful vision as the catalyst of art.

He insisted (against the soon-to-come Romantic claim to the opposite) that genius is the result of teaching, not transcendental inspiration alone. He was extremely keen to defend the observation of nature as it is and to shun the pretence of creating nature secreted away in one’s studio.

John Constable’s true inspirations are the vigorous tradition of English landscape painting, the great European masters like Titian and Rubens, and the aesthetic of the early English Romantics, the ‘Lake Poets’, in particular Wordsworth.

With the Poets, he shared the view that nature acquires a moral character depending on the state of the spirit of the spectator — a recognisably Romantic conviction.

Representative of the rational-inspirational juncture is Constable’s belief, possibly harking back as far as his lessons with Smith, that the artist must recognise the dominant hue of his scenery. Whatever his subjective import into the vision of nature, its main characterising colour must be transposed onto the canvas.

Constable’s creative process was meticulous, clearly imprinted with the pragmatics he had learned at the Academy. He first created a group of sketches with the pencil en plein air — a circumstance which, when supplemented with oil, made Constable the first, or possibly the second, artist ever to do so.

He then proceeded with his drafts, sometimes also on-site. These drafts would sometimes have the scale of the finished product. Such was Constable’s care that the fleeting moment in which nature is seen be captured by the art which mimics it, without addition or subtraction from the real.

When John Constable first exhibited paintings with his distinctive spots of white on the foliage, some critics thought him ridiculous and referred to them as ‘Constable’s snow’. They have been subsequently much appreciated as an ingenious device for representing the glint of sunlight on the (especially humid) surface of things.

The touch with which Constable applied his paint similarly lacked in appreciation among some of the early critics, who therefore declared his paintings unfinished.

As the second of Constable’s well-received ‘Six-Footers’, it shows a village scene in Suffolk on the banks of a river from which a paper mill (on the left margin of the canvas) draws its power.

A man and a pair of children are fishing while someone else’s boat is gliding on the surface of the water. But the true subject is clearly the curated natural scenery all around, in proportion to which the human figures bear no relevance.

It is one of the canvasses which the artist constructed on a uniform base of dark brown paint. The shapes painted above such a base benefit from starker volumes. The tincture has been applied in a series of light touches; a patina of lustre makes the foliage and the water shine where they are caressed by sunlight (which we intuit is only an ephemeral glimpse); the greenery of the leaves is modulated across the gamut of green; the enlightened and the benighted parts are in a structured opposition.

We readily believe that the local colour of the riverside meadow is authentic as we look at the areas of light that the artist has accomplished by juxtaposing a tonality of green and a different, bordering hue.

There is movement in the air: the tree branches are disturbed and the masses of clouds appear to be separating. To understand precisely how the clouds behave, Constable had spent countless hours sketching their mutations over time.

Cenotaph to the Memory of Sir Joshua Reynolds (1836)

This exceptional commemoration of Sir Joshua Reynolds, a highly regarded contemporary painter, was created by John Constable in honour of the artist (not for his funeral).

Reynolds had been buried in London. Constable instead imagined a commemorative, hallowed site in the forest, inspired by a passage from Wordsworth (which Constable had cited in the preparatory drawings).

The monument is placed in an arboreal recess resembling the apse of a church. An immediate impression is that of a sacred spot. On the opposite sides of the monument, two herms are standing: one of Michelangelo, the other of Raphael. Constable was thereby placing the artist within the elective fraternity of those Constable considered Reynolds’ peers.

A deer is caught in the act of turning backwards and in the direction of the viewer. The synesthetic impression obtains that we, the spectators, are the ones whose appearance has caused him to turn. As well as an impression of embedded sound and presence, the painting emanates a perception of a smell.

The season is cold, wet, and mossy, a puddle has gathered at the foot of the monument, brown leaves are decaying everywhere.

The Marriage of Tobias and Sarah: Jan Steen 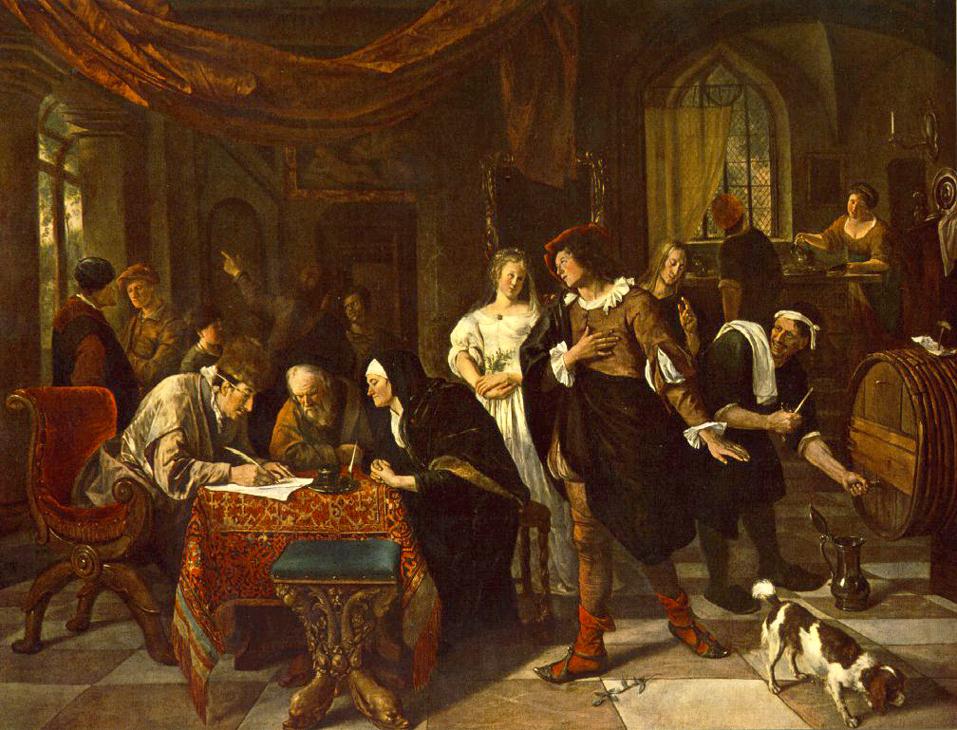 The Marriage of Tobias and Sarah is a 1673 painting by the Dutch Golden Age artist Jan Steen. This work is located in the Legion […]

The Expulsion of the Money-changers from the Temple: Jan Steen 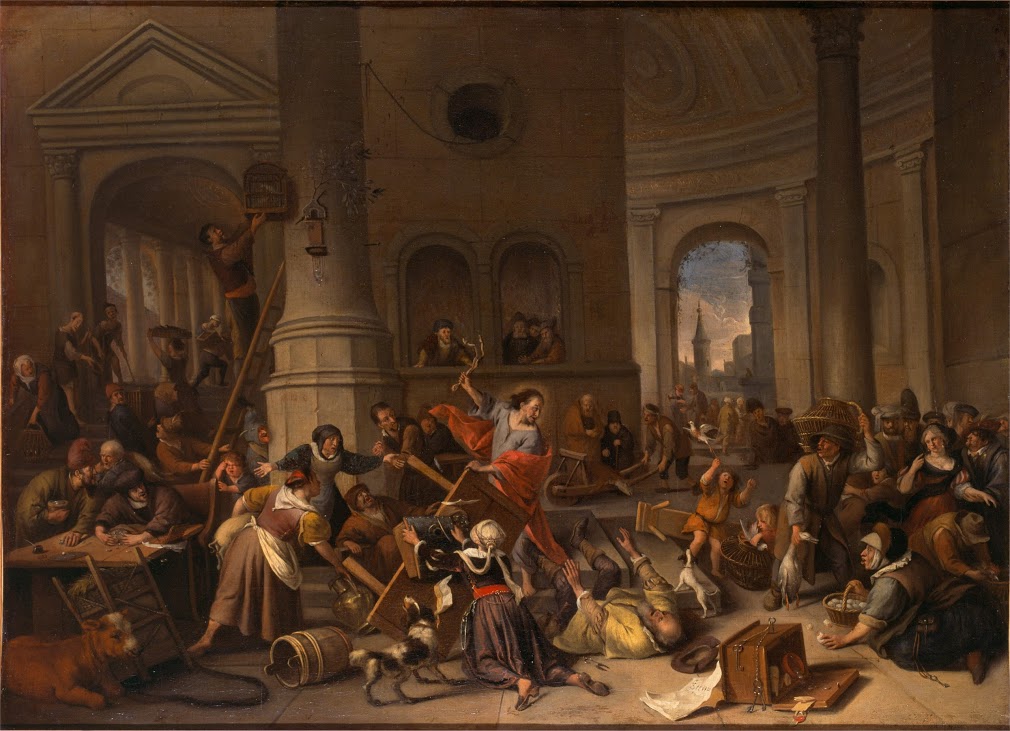 The Expulsion of the Money-changers from the Temple is a 1675 painting by the Dutch Golden Age artist Jan Steen. This work is located in […]

Grace before Meat is a 1660 painting by the Dutch Golden Age artist Jan Steen. This work is located in a Private Collection. More: Stonehenge: […]