Jan van Eyck (prior to 1390—9 July 1441) is the grandmaster most responsible for the Dutch Renaissance and the influence of his country’s art across the continent.

Professionally accomplished in his life, van Eyck was a painter who enjoyed aristocratic commissions and jobs as a political envoy. His fame endured and grew after his death, so much so that the Italian biographer Giorgio Vasari believed, a century later, that van Eyck was the inventor of oil painting. He was thus being widely identified with the achievements of Dutch and Flemish art.

Jan van Eyck — whose precise origin and date of birth have been approximated by historians through centuries of hypotheses — was a valet of the Dutch duke John of Bavaria between 1422 and 1424 with the function of a painter. After the lord’s death in 1425, van Eyck found employment by the exceptionally powerful and munificent Duke of Burgundy, Philip the Good. It is at this point in his career that van Eyck is recognised as a premier painter, given a stable salary, and even tasked with secret diplomatic missions for high pay.

The most delicate of these was his voyage to Portugal, to meet, paint, and accompany Isabel of Portugal, the Duke’s bride-to-be (van Eyck had previously sought the hand of Isabel of Spain in his patron’s name). While the painting itself is lost, it seems that it was a highly realistic portrait. Jan van Eyck’s typical style sought to depict the person as she was, with no attempt at beautifying her imperfections. An instance of this truth-to-nature approach we can admire in the Portrait of Margaret van Eyck (1439), his wife, who, although possibly a descendant of minor nobility, is in no way exalted in her husband’s treatment. Her appearance and clothing are only tidy, appropriate for a lady of decent standing. History knows almost nothing of Margaret, not even her maiden name.

A veil of mystery also hangs over “Hubert von Eyck”, praised and cited as co-author in a late inscription on the Ghent Altarpiece (completed in 1432). While ostensibly a real person named in administrative documents, Hubert is unknown as an artist outside this peculiar citation.

Jan Van Eyck was, by all appearances, a successful and confident painter ever since his establishment at the court of Philip the Good. Besides his generous commissions, van Eyck clearly enjoyed the lord’s exceptional trust. He also distinguished himself by regularly signing his paintings and sometimes appending his personal motto “Als ik kan”, meaning “As best I can”/”As I can” and playing a pun on his surname.

The Ghent Altarpiece showcases the Eyckian technique and themes ideally. It is regularly called his masterpiece and, together with the Arnolfini Portrait (1434), it is van Eyck’s most famous painting.

This polyptych of twelve interiors and twelve exterior panels display the enthroned Christ with the Virgin Mary and John the Baptist on either side. Choirs of angels flank the three great figures on both sides and, in dingy architectural alcoves, stand Adam and Eve (astoundingly, the contemporaries of Masaccio’s Expulsion from the Garden of Eden), one on either extremity of this upper register.

Below, a structured gathering of saints, martyrs, wise men, and Prophets reveres the Lamb of God beside the Fountain of Life, on the outskirts of Jerusalem. The panels on the extremities of the lower register represent St. John the Baptist and St. John the Evangelist on one side and the donor family on the other.

As a movable altarpiece, this entire structure opened and closed at the times of liturgy. The brownish back panels with Prophets and Sibyls parted to reveal the wide double order of highly colourful figures. The effect on the pious populace can be readily imagined.

These remarkable sets of mostly biblical figures are rendered with an astounding rigour for detail, as is the ambient vegetation and the angels’ instruments. It is a luminous detail, befitting van Eyck’s oil technique, and the mostly saintly figures all around shine in colour as if the light of the true faith is illuminating them from the inside.

And so despite the heavenly circle on the top, from which the dove of the Holy Ghost is shining, everything is set in a world in which light is omnipresent, has no particular source, and the shadows that the figures cast are minimal.

The realism and predilection for disguised theological symbolism, which the artist is nowadays believed to have gleaned from his master Robert Campin, determine the charm of van Eyck’s figures.

In the Ghent Altarpiece, we are fascinated by the supreme character in the upper part, as we wonder whether it is God or Christ that is being represented. John the Baptist surprises us as the holder of a holy book, an unusual attribute for him. The angelic host makes us question the panels’ ultimate meaning by their sheer oddity: variously expressive, arguably human, and wingless. The success of van Eyck’s detail makes us think we know what each one is thinking and indeed which notes each one is singing. Adam and Eve, no less, raise the question of why they are showing no remorse in their post-Fall state.

All throughout this altarpiece, it is Latin inscriptions above all that certify the connections we make between figures and passages in the Bible.

Van Eyck ability to deploy original perspective (an aerial perspective indeed in the Ghent Altarpiece), his devotion to luminous colour and rich detail and his free pursuit of religious meaning in the painting make him an artist of unsurpassed achievements. The admirers of subsequent generations who wished to emulate him only ever chose sparse elements of his compositions to copy. If they possessed any share of the liberties enjoyed by van Eyck, they never attained the exceeding skill and vision of the master who made beautiful colour a byword for the Netherlands and the Flanders for centuries.

A Bar at the Folies-Bergère: Édouard Manet

A Bar at the Folies-Bergère (1882) is one of the most famous Impressionist paintings, a symbol of Édouard Manet, and is widely considered to be […]

12 of the Most Famous Paintings by Pierre-Auguste Renoir 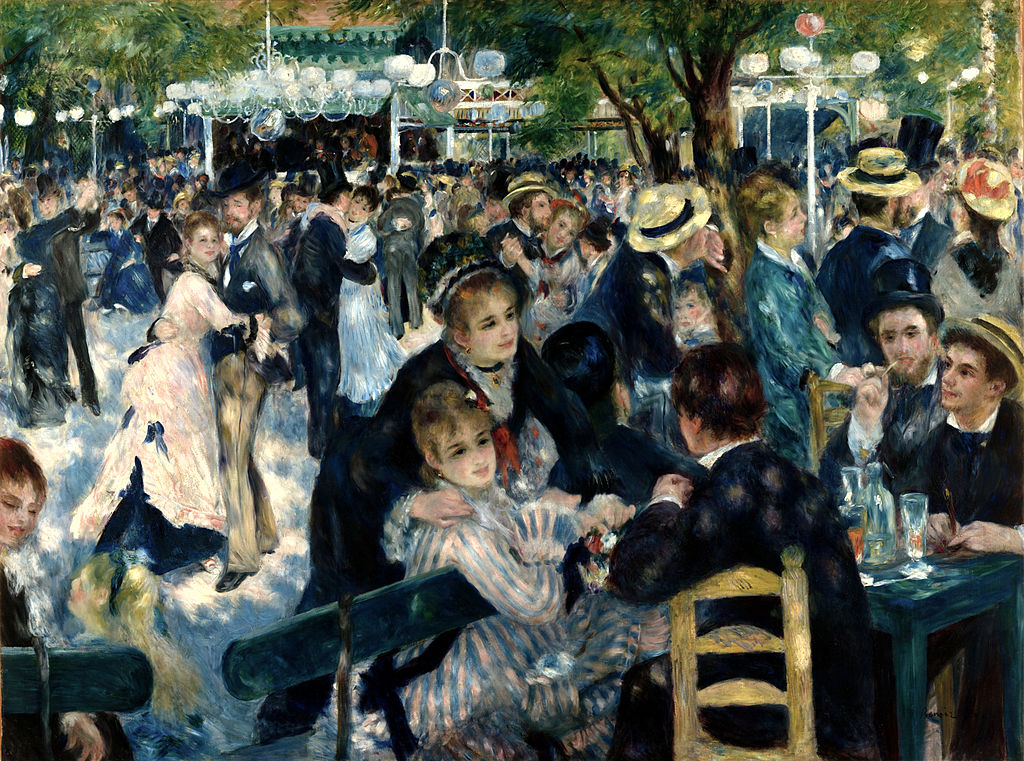 These are the 12 most famous paintings by Pierre-Auguste Renoir, an artist who was born in France in 1841. He was an important person in […]

Lydia Crocheting in the Garden at Marly: Mary Cassatt 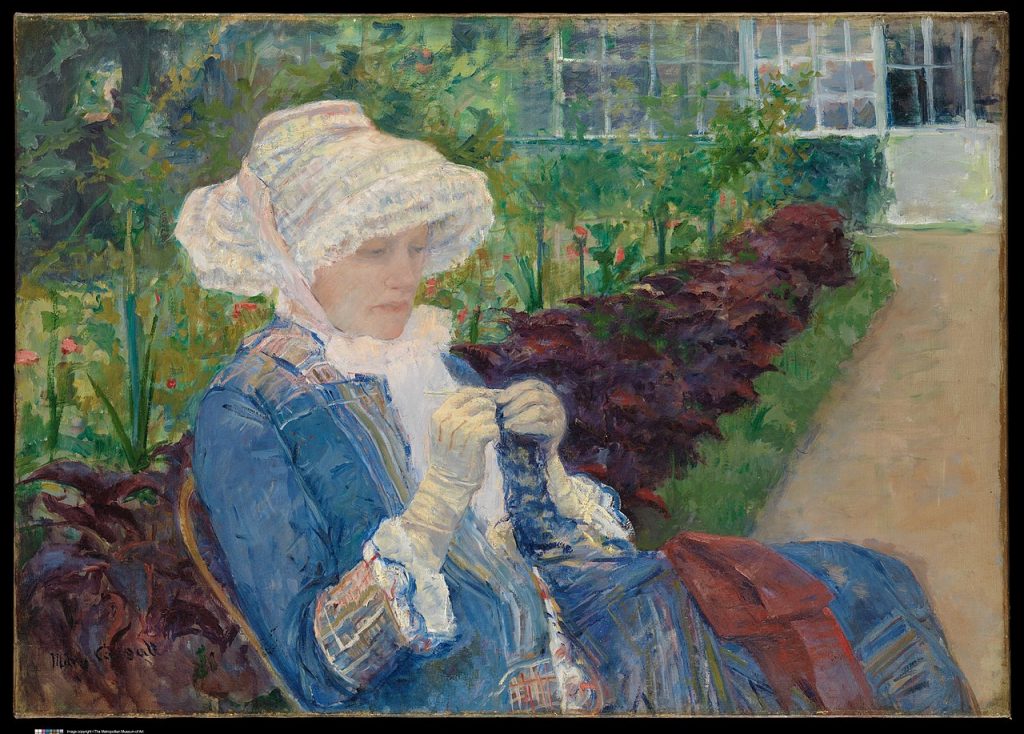 Lydia Crocheting in the Garden at Marly is an 1880 painting in the Impressionist style by the leading American painter and printmaker Mary Cassatt. This […]