The Slave Ship is an 1840 oil painting by J.M.W. Turner in the Romantic Maritime style, which Turner was well known for. On the surface, it looks like an innocent painting of a stormy sea with a ship middle left struggling to find its passage through.

During the Atlantic slave trade slave ship, owners would take out insurance policies on their human cargo. Turner’s The Slave Ship depicts the practice of throwing cargo (again – Humans) overboard in stormy seas in order to collect the money from the insurance they have taken out, often when the men and women have become too sick from the appalling conditions to be of value in the slave markets. This is best documented by the British slave ship Zong in 1771 when 133 people were thrown overboard.

During the painting’s early days it was titled “Slavers Throwing overboard the Dead and Dying—Typhoon coming on” and the painting was exhibited to coincide with a meeting of the British Anti-Slavery Society where Prince Albert was speaking.

The Slave Ship shows the inclemency of nature — a typhoon about to charge a lightship at sea — and the horror of human nature: black slaves have been thrown overboard for reasons of profit.

A spectacular orange horizon appears to break, as if at dawn, over a scene of horror and alarm. Yet it might take us a few moments to realize what exactly is happening, so assertive is the gleam of the sun at the center.

Turner’s original title helps us to begin to understand: “lavers Throwing overboard the Dead and Dying — Typhon coming on” a far more descriptive than what is now a far simpler – and much less confronting, title of the picture.

It is the strong darkening of the sky on the left that testifies to the incoming typhoon. Similarly the fact that the slave ship — a light vessel ideal for escaping British navy patrols — has raised its sails to gain speed and, hopefully, move out of its way. Finally, the tumult of the sea all over leaves us in doubt that a storm is about to invest anyone and anything left in this space.

What makes us realise that human beings have been jettisoned into the water just as the storm has begun to break are the many indistinct figures marking the entire lower register, which is to say the foreground, of this painting. We notice shapes — things that cannot be water even though no liminal line separates them from it — and we notice blood. Beasts, from the air and from under the surface, have begun attacking the people that have been thrown overboard. One black leg with a chain at the ankle can be seen in the lower-right corner. It may be that of a woman, for breasts can perhaps be seen under the water.

The real-life event which seems to have inspired The Slave Ship is a story from 1781 which had gained great publicity in Britain at the time but was first published in book form in 1839, a year prior to The Slave Ship’s public appearance.

The captain of a slave-trading ship headed for Jamaica called Zong ordered the throwing overboard and therefore the murder of over 130 African slaves because drinking water on the ship had become insufficient.

The captain expected his insurance to cover the cost, as per the agreement, of all slaves “lost” during shipping. When the insurance company refused, on the grounds that the “cargo” had not been lost through accident, the slave-trading syndicate brought a lawsuit against the insurance company.

The story of Zong gave an additional impulse to British abolitionist activism when it was originally publicized during the trial of 1783. It did so again in 1840 when Turner gave his Slave Ship to the public at the Royal Academy of Arts in London. The exhibition occurred in the same year as two major anti-slavery conventions.

Turner’s aim was doubtless abolitionist. He had been engaged artistically with the theme of the cross-oceanic slave trade for years. The Slave Ship had an unfinished poem of his appended which pointed to the inhumanity of commercial profit done through slavery. Turner’s general suspicion of industrial modernity and commercialization in played a significant, if not the main, role in his revulsion to slavery.

The technique of Turner’s landscapes — for that is what The Slave Ship primarily is — is overbearing. It dissolves all shapes through its evasion of defining lines and its absolute reliance on color. A scene of remarkable disturbance is thus created through quick brushstrokes which almost imitate something of the frenzy of their subject matter. It must be noted that the element of the sea storm is an invention of Turner’s — the original story of Zong had the waters calm and serene in the face of human tragedy.

In Turner’s vision, it is as if the upset of nature — the storm, the incoming typhoon — signifies participation in the human emotions of fright, horror, and alarm. But at the same time, besides the typhoon — which, we realize, would have come regardless of what happened at the Zong, and which in any case cannot be said to have caused it — nature, in general, is essentially impassive, and as beautiful as ever.

The sun is shining ponderously through the overcast. We enjoy this landscape’s sublime beauty — the special quality that we appreciate in overwhelming natural phenomena such as the sea storm — as if nothing else besides was happening.

One interpretative question which is hung over The Slave Ship is whether, and to what extent, the mighty beauty of the natural world (a staple of Turner’s perception) distracts from its supposed subject matter: the killing of an enormous number of enslaved human beings for reasons of money.

In defense of The Slave Ship, it might be said that this manner of storytelling is arguably the only one that befitted Turner’s style. Crucially, the title of the painting would always lead the viewers to the painful human story, even should they fail to notice what is happening in the lower half of the canvas.

It might even be said that Turner’s vision of the natural world juxtaposed to the human tragedy is essentially true and that it adds, if anything, to the deep misery of that story.

The success of The Slave Ship in facing the world with the crime of slavery and, in general, with human evil is testified by the notice with which the London public took it in. Then, it is confirmed beyond argument by the enduring interest of art critics, philosophers, educators, activists, and, perhaps most importantly, ordinary art-loving people the world over.

J.M.W. Turner: The Slave Ship is in the Museum of Fine Arts in Boston, Massachusetts in the United States. 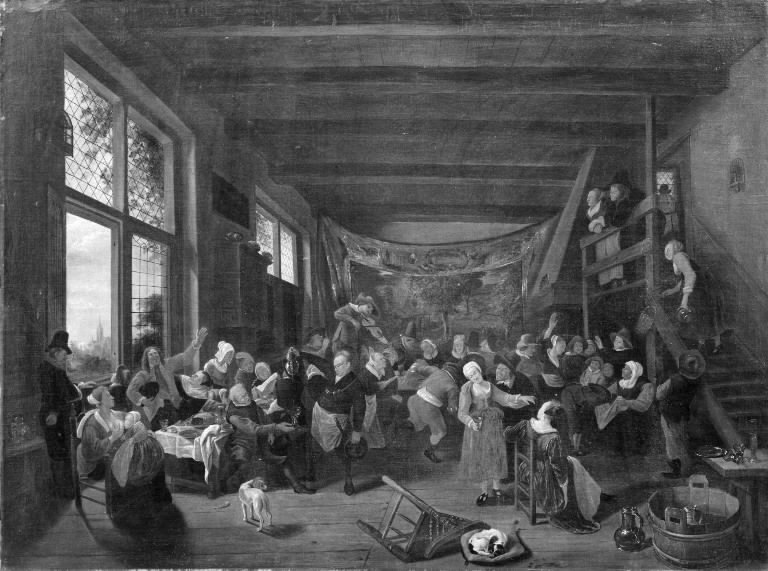 Peasants’ Wedding is a 1600s painting by the Dutch Golden Age artist Jan Steen. This work is located in the Statens Museum for Kunst in […] 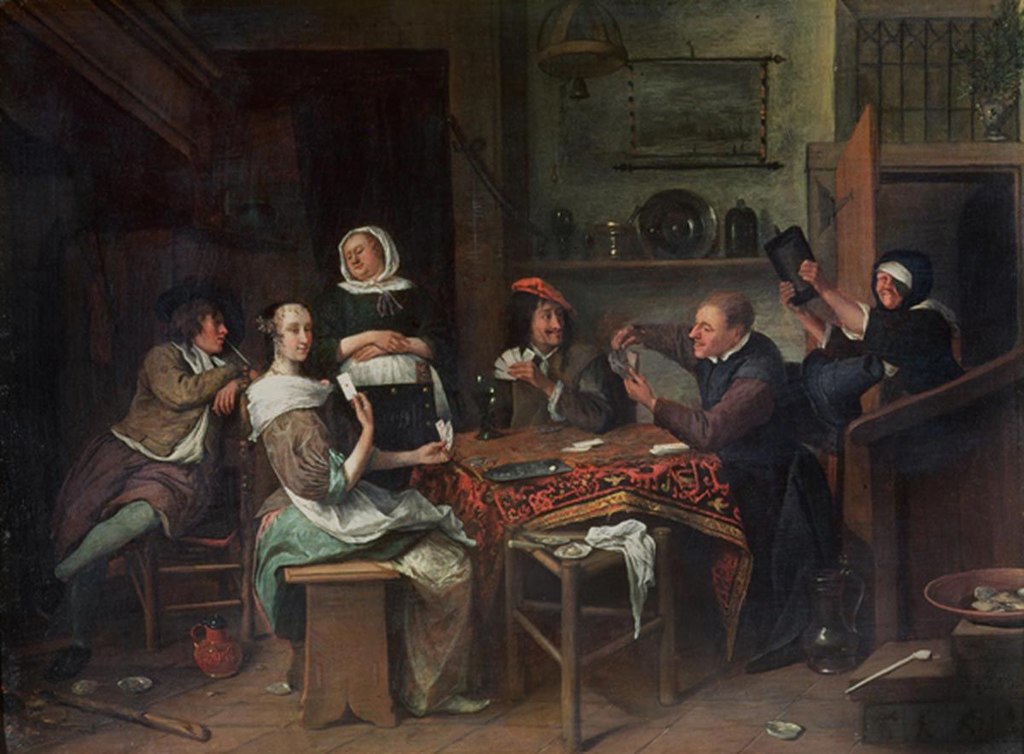 The False Players is a 1665 painting by the Dutch Golden Age artist Jan Steen. This work is located in a Private Collection. More: The […] 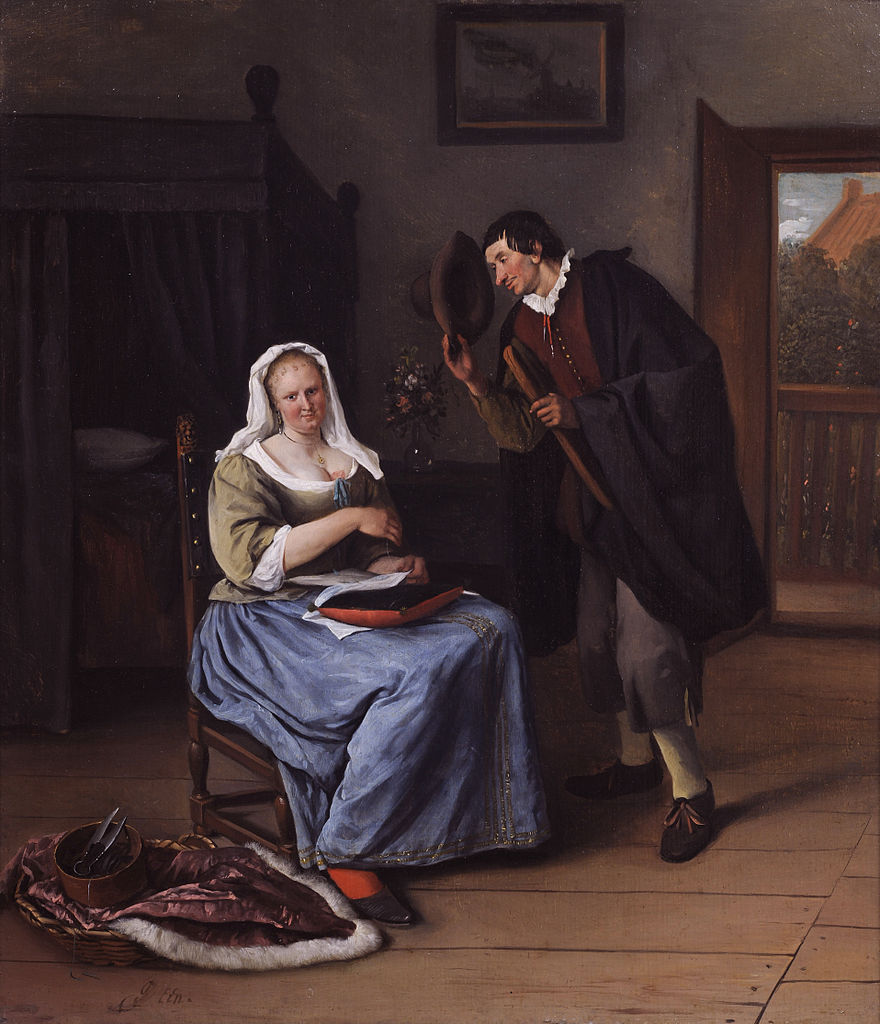 The Suitor is a 1664 painting by the Dutch Golden Age artist Jan Steen. This work is located in the Museum De Lakenhal in Leiden, […]