Filippino Lippi, (born c. 1457, Prato, Republic of Florence—died April 18, 1504, Florence), was one of the early masters of the Renaissance. He was a prominent member of the Florentine School which produced many masterpieces and was highly influential.

He is unique as he was not only a great painter but the son of a great painter. Though not as famous as other Renaissance painters Lippi’s importance cannot be overstated.

The painter was the son of another painter Fra Filippo Lippi and his partner, Lucrezia Buti in Prato, in the Florentine Republic. It appears that Lippi was apprenticed to a master painter. This was the traditional way to train in the art of painting.

At first, he trained with his father but upon his death, he trained with Sandro Botticelli, who had once been his father’s pupil. The painter finished his apprenticeship about 1473 and became a member of the Guild of St Luke. It appears that from an early date that his talents were recognized.

He was employed along with other notable artists on creating frescoes for the Villa of Lorenzo De Medici. Lippi also worked for the powerful Strozzi family and created frescoes for their chapel.

It appears that Lippi became influenced by the teachings and thoughts of the Humanists and he became fascinated with the works of the Ancient Greeks and Romans. His reputation was such that he was commissioned to finish painting the Brancacci Chapel in the Carmine, which had been left unfinished when the original artist Masaccio died in 1428.

Lippi spent nearly all of his life in Florence apart from a few years living and working in Rome, Pavia, and Bologna.

Filippino Lippi was the illegitimate son of Fra Filippo Lippi and his partner, Lucrezia Buti. At the time being born out of wedlock was scandalous and certainly uncommon. His father was a Carmelite priest who would later become a noted painter.

His mother had been a nun and Lippi was conceived when his father became chaplain to the convent where his mother lived. Fra Filippo Lippi was one of the finest painters of the Fifteenth Century.

Lippi’s work clearly shows the influence of the Italian Renaissance’s rediscovery of perspective and anatomy. His work is realistic yet also highly decorative and idealized.

His early work shows the clever use of lines. Gradually he developed his own individual style and his work focuses on the humanity of his subjects even when dealing with mythological and Christian subjects.

Filippino Lippi’s style can be characterized as a form of Humanism and realism. Many of his subjects depict Christian subjects drawn from the Bible and Classical mythology and yet they remain very real.

Filippino Lippi painted within the tradition demanded by his famous patrons, however, he was able to produce a very individual style and one that was to be much admired by later artists.

Many of his works depart from strict realism and contain fantastic images or anthropomorphic forms. Lippi’s style is considered to be one of the finest examples of Grottesco, a style characterized by its enigmatic, unusual, and eccentric images and often weird.

They often have a dream-like quality and are often disturbing. Many believe that Lippi’s style reflects the tensions between Christianity and Paganism that lay at the heart of the Renaissance.

Lippi was taught by his father Fra Filippo Lippi and also later by Sandro Botticelli, two of the most distinguished painters of the Early Italian Renaissance.

Among his influences were his father and above all his mentor Sandro Botticelli. Lippi was greatly inspired by the Florentine School.

Other artists Lippi worked with

Among the artists that Lippi Filippino collaborated with include Pietro Perugino (Annunziata Polyptych from 1504–1507), Ghirlandaio, and of course Sandro Botticelli.

Lippi was the assistant to Botticelli when he was painting some of the most important paintings of the 15th century.

Lippi’s work on the frescoes at Lorenzo de’ Medici’s villa at Spedaletto sadly, has been lost. His completion of Perugion’s fresco in Palazzo della Signoria in Florence has also been lost.

It is impossible to determine how many works of Lippi have been lost down the centuries.

Lippi’s last work was the fresco the Deposition for the Santissima Annunziata church which he left incomplete at the time of his death. Pietro Perugino would later finish it three years later in 1507.

Lippi moved to Rome and here he worked for Cardinal Oliviero Carafa, one of the greatest patrons of the Renaissance.  After completing a cycle of frescoes for the Cardinal he returned to Florence. His fame grew in his native city and he had his own workshop. Another noteworthy work is the Wounded Centaur (1500).

Filippino Lippi died on April 18, 1404, at the age of 47 in Florence, Italy. The cause of his death is unknown, however, his fame and respect by his contemporaries at the time of his passing was large – all workshops in the city of Florence were closed in his honor on the day he died. 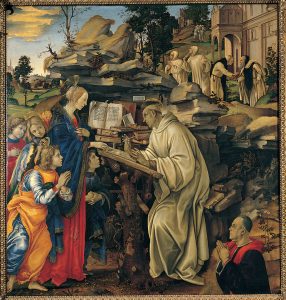 His most famous work is the altarpiece ‘Apparition of the Virgin to St. Bernard (1486-7).

None of the artist’s paintings have come to the market for many years and the majority of his paintings are owned by public galleries in Italy or are part of Catholic Churches and chapels and cannot be moved or sold.

Lippi’s later paintings in the Grottesco style have been of particular importance. Their artificial and often fantastic style inspired the Mannerists in the 16th century.