These are the 12 most famous paintings by Hieronymus Bosch. Hieronymus Bosch is well known for works that have a shockingly vivid and dream-like quality. Most brilliantly inventive and ethically complex of all northern European religious artists. Only about 25 original pieces are known to survive, but his paintings’ nightmarish iconography is easily recognizable as “Boschian” and has become a standard of the grotesque genre.

One of the strangest works in art history and certainly the most famous painting by Hieronymus Bosch, this painting depicts the Garden of Eden, where God presents Adam and Eve; the Garden of Earthly Delights, where men and women explore sexuality and pleasure; and Hell, where men and women are tortured by animal-like and demon-like creatures. Bosch’s attention to detail and aesthetic ability in presenting these horrific micro-narratives within a single macro-narrative is very interesting.

This painting depicts the Mass of Saint Gregory in a single scene, featuring Gregory the Great kneeling at an altar in front of Christ. “The Adoration of the Magi” is also known as “The Epiphany.” A partially naked figure at the hut’s entry, surrounded by other grotesque figures wearing a red mantle—a tiara with metallic twigs in the hand, covered by a glass structure, is an interesting element.

The Crucifixion of Saint Wilgefortis (1497)

This is a painting of Mary praying while looking at the Christ child, who is laying down with no clothes on. Previously, this painting was attributed to Bosch. The themes are cattle, nativity, and nudity. The “Adoration of the Christ Child” was created during the period of the Early Netherlandish Renaissance.

This is a painting depicting Christ’s first miracle, changing water into wine, during the wedding feast at Cana. The bride and groom are traditionally identified as Saint John the Evangelist and Mary Magdalen. This was one of the forty-seven panels produced for Isabella of Castile to represent the lives of Christ and the Virgin.

This is a painting depicting Jesus Christ carrying a cross, surrounded by a group of eighteen caricatured heads, each with a distinct strange expression. Different grotesque heads all represent the inner workings of human beings. They are meant to draw attention to their ugliness, shame, sins, and all of their hidden addictions.

This painting depicts ten people trapped in a boat, with two others falling overboard. An “Allegory of Gluttony” and “Death and the Miser” are portrayed in two sections. Overall, it’s a group of fools floating in the sea, eating and drinking. They are all lost in life and clueless about the men overboard. This beautiful painting is one of Bosch’s most powerful and moving masterpieces.

This painting depicts the kneeling donor praying for his salvation and is assisted by his patron, St. Peter. Although the theme appears as a minor motif in other Bosch paintings, there is no other crucifixion known by him. This is one of the master artworks with a donor portrait that is balanced and peaceful.

This painting depicts the influence of popular 15th-century handbooks on the “Art of Dying Well,” which were intended to assist Christians in choosing Christ over earthly and immoral pleasures. “Death and the Miser” is also known as “Death of the Usurer.” This is a memento mori painting that portrays the sin of greed by reminding the viewer of the reality of death and the futility of pursuing material wealth.

The conjurer is depicted as a typical criminal, luring the victim. With a game of cups and balls, he catches his diverse and appreciative audience. Beasts are used in the painting to represent human characteristics that enable dishonesty and cruelty. This painting is available in five different versions, including an engraving.

What famous paintings by Hieronymus Bosch do you think we should add to this list? Comment below. 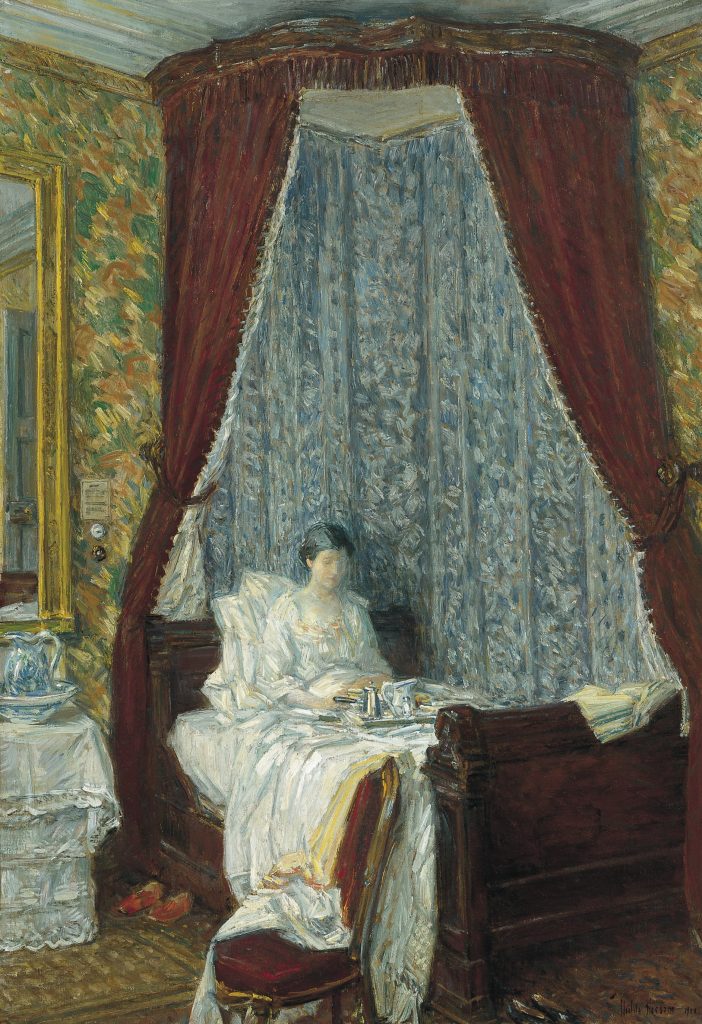 The French Breakfast is a 1910 Impressionist painting by American artist Childe Hassam. This work is located in the Thyssen-Bornemisza Museum in Madrid, Spain. More: […] 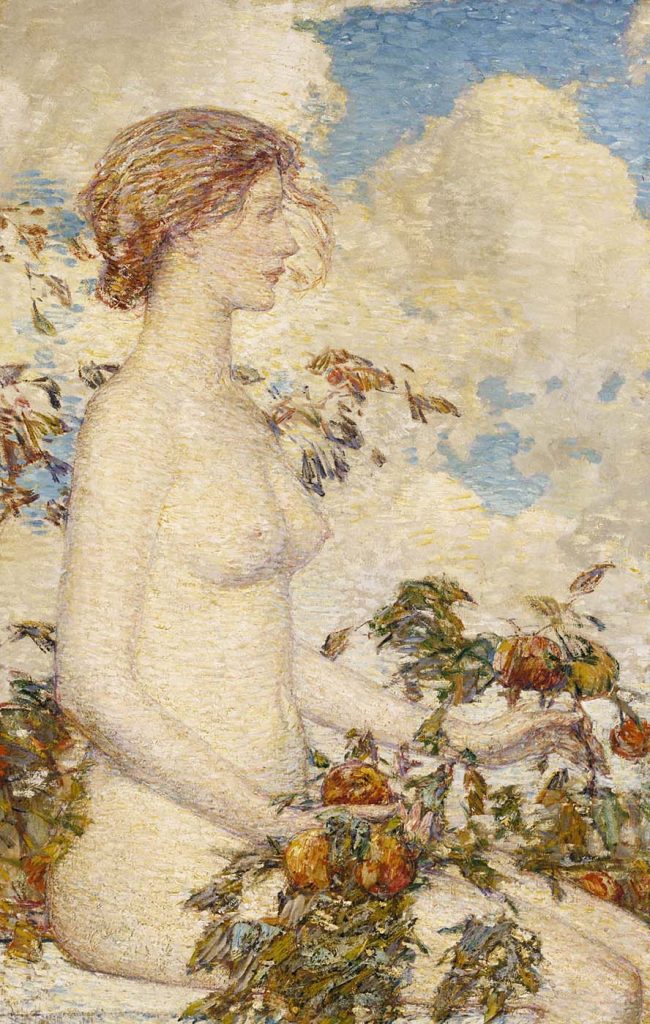 Pomona is a 1900 Impressionist painting by American artist Childe Hassam. This work is located in the Smithsonian American Art Museum in Washington, D.C., United […] 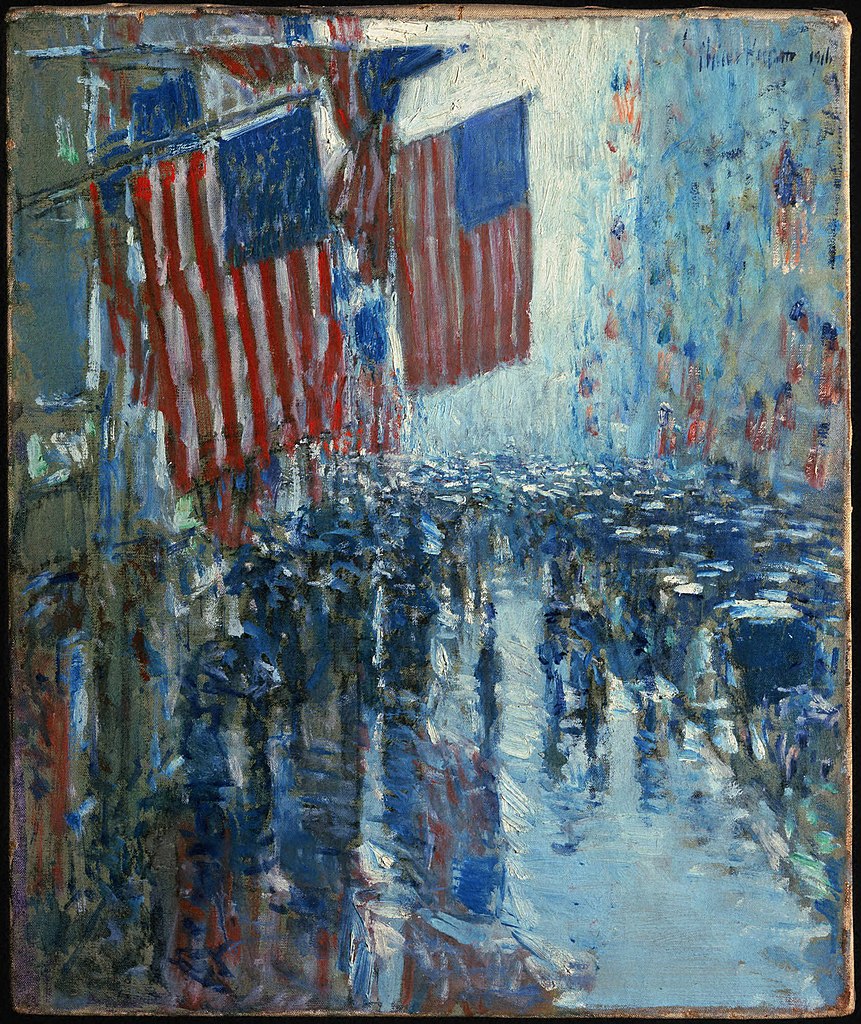 Rainy Day, Boston is an 1885 Impressionist painting by American artist Childe Hassam. This work is located in the Toledo Museum of Art in Toledo, […]