These are the 12 most famous paintings by Caravaggio. Born in 1571, he was an important Italian painter in the late sixteenth and early seventeenth centuries. Caravaggio’s short and turbulent life reflected the drama of his paintings being arrogant, rebellious, and a murderer. Caravaggio’s works were controversial, popular, and highly influential on subsequent generations of painters all over Europe due to their dramatic, almost theatrical lighting.

This intriguing painting is one of the most famous paintings by Caravaggio. Young Sick Bacchus is a self-portrait dressed as Bacchus, the Roman god of wine, intoxication, and the grape harvest. He painted this image while recovering from a bad illness. He has jaundice, which causes the skin and whites of his eyes to turn yellow. This self-portrait was most likely made to demonstrate the artist’s ability to paint still lifes and portraits.

This painting depicts a performance setting as an allegory of music. It shows four male individuals dressed in classical robes, three of whom are holding musical instruments, and one is dressed as Cupid, reaching for a grape. This was Caravaggio’s most difficult composition at the time of its completion, and it remains one of his most amazing early works, despite various inconsistencies in the artwork.

Saint Francis of Assisi in Ecstasy (1595)

This painting depicts Saint Francis resting in the arms of a winged angel. The saint’s eyes are closed, and his intense expression suggests that he is suffering deep emotion or ecstasy. Due to the general spiritual glow in the painting, the light illusion is crucial. This was Caravaggio’s first religious painting.

This is one of the most iconic and recognizable of the famous paintings by Caravaggio. This is a painting of Medusa, a Gorgon monster, who is a fearsome female figure from Greek mythology. Despite Caravaggio’s depiction of Medusa’s decapitated head, she is still alive. He achieved impressive technical accomplishments by making a convex area appear concave and Medusa’s head appear to extend outward. Two different renditions of Medusa’s head were painted.

This painting depicts Saint Matthew, a Jewish tax collector, realizing he is being summoned for the first time by Jesus. The event is portrayed as a dramatic, oddly silent story. While the narrative may appear simple, it demonstrated that even the most despicable of people might be rescued and welcomed to follow Jesus.

Another hugely recognizable work of the many famous paintings by Caravaggio tells the Biblical story of Judith, who saved her people by seducing and executing the Assyrian general Holofernes, which was a popular motif in the 16th century. In Judith Beheading Holofernes, the influence of Da Vinci may be seen. The old serving-woman is a small masterpiece within a masterpiece. This biblical scene has been painted by a number of other artists, including Artemesia Gentileschi’s Judith Slaying Holofernes.

This painting depicts Cupid rather than the cherub-like, idealized boy, from the crooked smile to the messy hair. The painting’s subtlety is not confined to the theme, and the background on the left is strangely unfinished, with meaningless symbols. This was an instant hit painting that inspired contemporary artworks such as poetry and epigrams on the same subject.

This painting depicts Saint Jerome, a Roman Catholic Doctor of the Church who was a popular subject for artists. Caravaggio has painted him in meditation and writing in other paintings. Since the artwork was completed quickly, there are some irregularities in the beard and the outlines of the books and robe.

Salome with the Head of John the Baptist (1609)

This painting is of a Biblical event in which an executioner hands Salome the beheaded head of John the Baptist while an elderly woman watches along. Caravaggio changes her from an inaccessible, mythologized figure into a flawed human being. This painting has a peaceful, sorrowful, and melancholy mood and its coloring is very similar to Caravaggio’s earlier works.

This painting depicts the head of Goliath hanging from David’s gloved hand with blood rather than putting it on a ledge. For the first time, David displays compassion and pity; his face is free of hatred, and his gaze is free of anger for Goliath’s actions. The Head of Goliath was actually Caravaggio’s self-portrait.

This painting depicts a handsome street boy in a lovely position, with his head tilted slightly, his shirt down from one shoulder, and his basket softly pressed against himself. Sensuality is expressed in the painting. To avoid the fruit blending with the natural setting, the artist primarily depicted the boy in a room rather than in nature.

Another particularly intriguing example of the famous paintings by Caravaggio is a single portrait figure with some still life elements, such as the fruit and glass bowl in front of a boy. A lizard appears and bites the boy, who is noticeably surprised. This painting is a change from the airless stillness of early works like “Boy Peeling a Fruit” and “Sick Bacchus.” 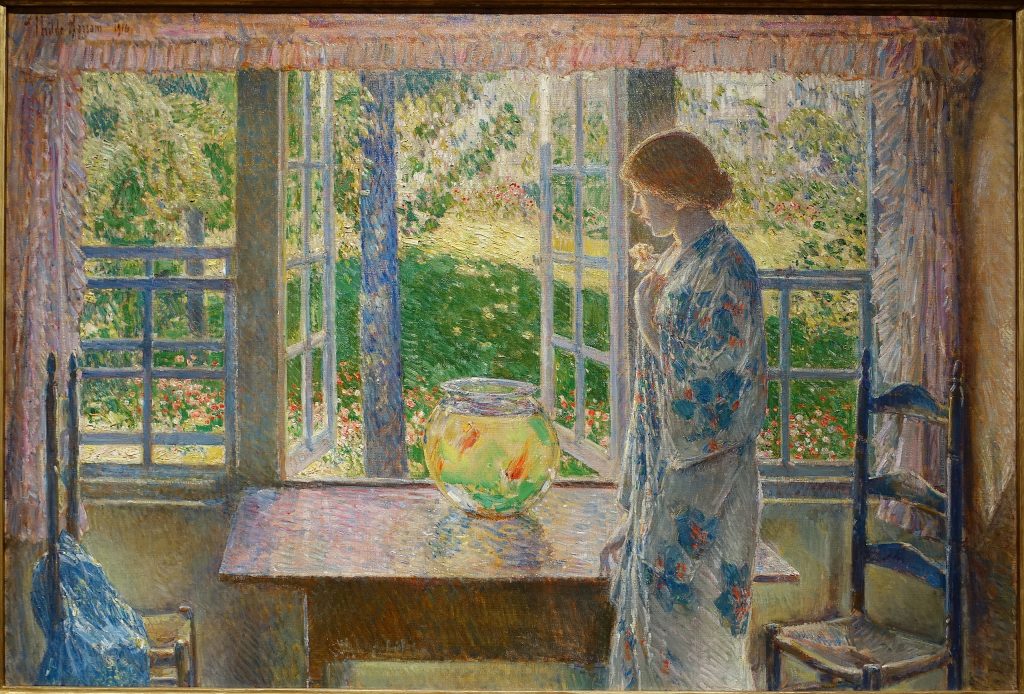 The Goldfish Window is a 1916 Impressionist painting by American artist Childe Hassam. This work is located in the Currier Museum of Art in Manchester, […] 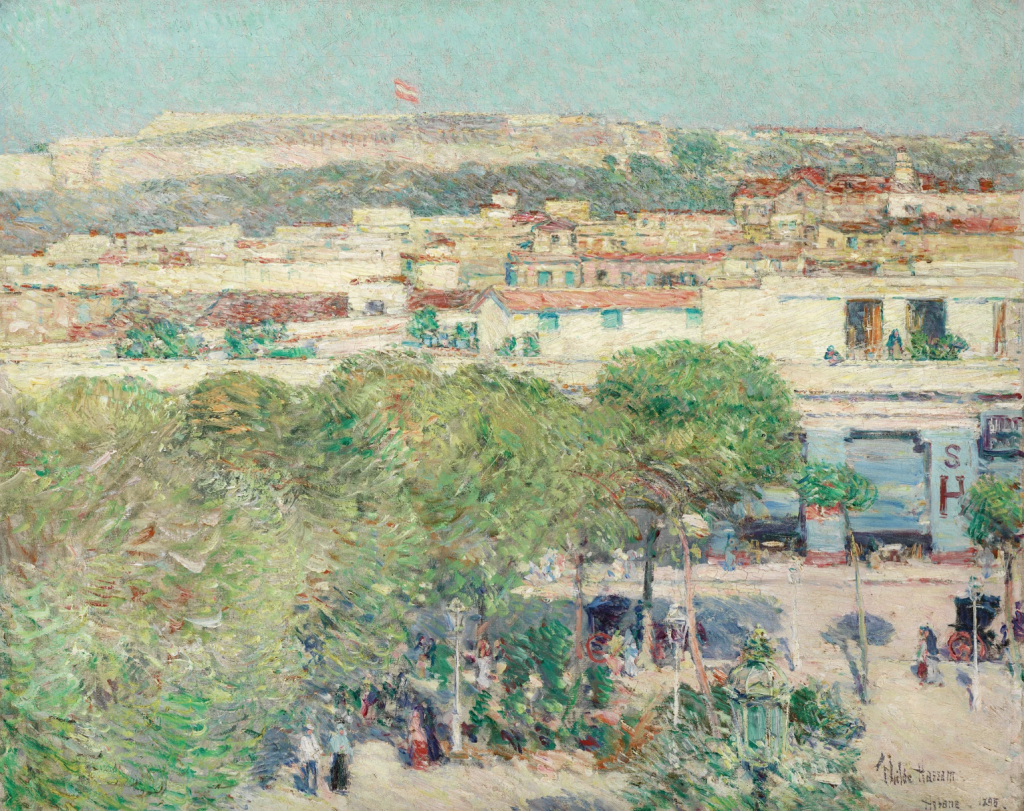 Place Centrale and Fort Cabanas, Havana is a 1895 Impressionist painting by American artist Childe Hassam. This work is located in the Detroit Institute of […] 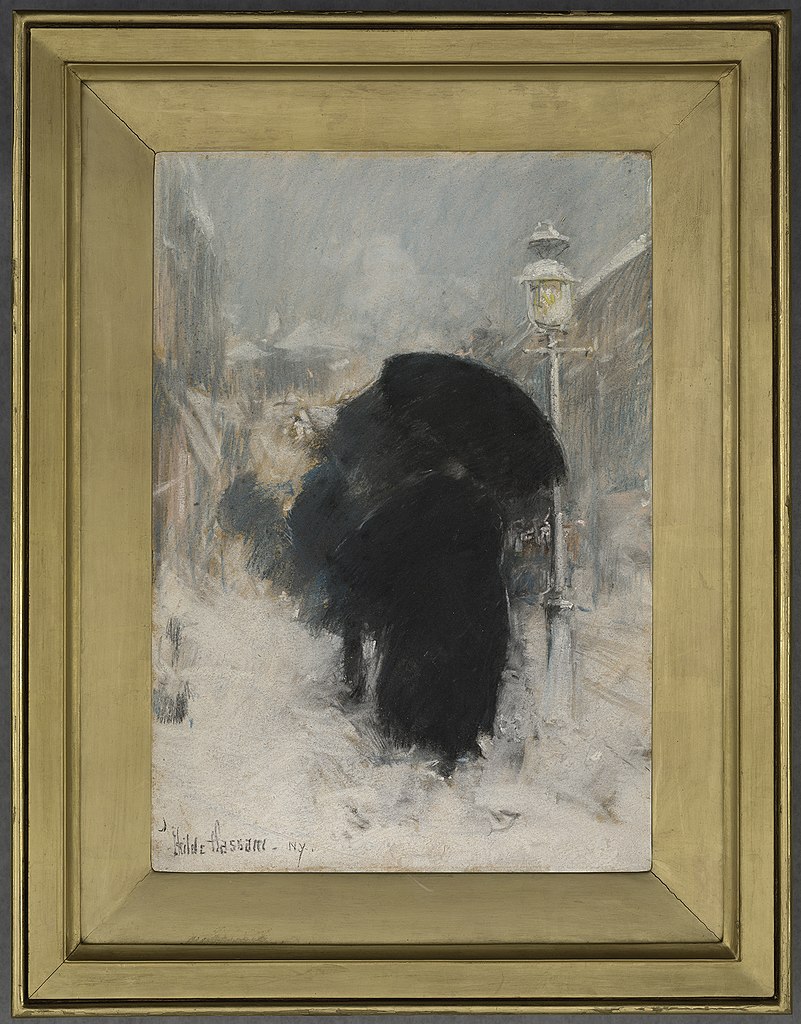 A New York Blizzard is an 1890 Impressionist painting by American artist Childe Hassam. This work is located in the Isabella Stewart Gardner Museum in […]