Eugène Delacroix (April 26 1798—August 13 1863) is the supreme master of Romanticism in painting. Acknowledged from a young age as a technically gifted artist, he created some of the world’s most iconic paintings.

Eugène Delacroix had a thoroughly successful artistic career. It began at the prestigious imperial institute Lycée Louis-le-Grand, where he mastered the classics and showed a talent for drawing, and it was encouraged by the paternal affection of Talleyrand, then Foreign Minister and soon-to-be Prime Minister of the kingdom of France, who may have been his biological father.

He acquainted himself with the current neoclassical style and the academic approach. Besides the absolute classics, Delacroix was trained with an eye to the standard set by the contemporary French master, Jacques-Louis David.

His study under Pierre-Narcisse Guérin leads Delacroix to learn about the work of Théodore Géricault, another pupil of Guérin’s. The flamboyance of Géricoult and Peter Paul Rubens influences his devotion to colour at this formative stage of his career.

Guérin also encourages Eugène Delacroix’s realisation that he ought to abandon the academic reverence for shapely proportion and seek a more original expression. As he then argued in his writings, Delacroix consciously rejected academia which taught beauty as a science.

He noted how the great masters like Michelangelo subjected proportionality to the needs of their art, how it is possible to obtain impressions of the whole from scarce details, how it is important to settle upon the key lines of composition, dispense with the decorative Nuage, and accomplish the most expressive colour.

In other words, he came to the realisations that would define the romantic approach to the arts and prepare all the other modernist advances, from Impressionisms to the avant-garde. Paul Cézanne will later say, “all of us are in Delacroix”.

Already at the age of 24 Delacroix was exhibiting his Barque of Dante (1822) at the official Salon. Directly inspired by Théodore Géricault’s spectacular Raft of the Medusa and its dramatic setting and shapes, the painting showcased the young artist’s sense of complementary colours and strong compositional lines, as well as his sheer technical proficiency. Often remarked upon were the droplets of water that the artist had made glisten on the bodies of the damned.

Eugène Delacroix had a cultivated taste for literature, which often inspired his art. The Dantesque vision of the sixth circle of Hell is depicted with great care for the detail indicated by the author. Delacroix is devoted to the writing of Walter Scott and Lord Byron and, like other romantics, seeks the sublime impressions in his reading of the classics and history.

In his composition he seeks a sense of quasi-musical harmony; many of his subjects bear synesthetic suggestions of sound, smell, and touch. Baudelaire proposed a comparison between the painting of Eugène Delacroix and the romantic music of Carl Maria von Weber.

The Barque of Dante would be the subject of an early study by Édouard Manet in the 1850s, and it was promptly acquired by King Louis XVIII.

In the 1820s, during the clashes of the Greek War of Independence (1821-1829), Delacroix shared the philhellenic sympathies of many European romantics. Inspired by the patriotic subject and Lord Byron, Delacroix produced several paintings displaying his perception of the Greek struggle (most pointedly Massacre of Chios). In the same period, he also visited England, where he encountered the landscape paintings of John Constable and J.M.W Turner. These are also the years of his lithographic productions, his illustrations of Shakespeare’s plays and Goethe’s Faust.

Liberty Leading the People of 1830 was to be Eugène Delacroix’s most famed accomplishment. It was to be both admired and purchased by the royal government but also removed from sight due to its inflammatory democratic suggestion. After the Revolution of 1848, it would be displayed with more zeal by the republican and the imperial governments.

In 1832 Eugène Delacroix had the opportunity to pursue his passion for the Orient and the exotic as he travelled to Morocco and Algeria as part of a diplomatic mission to the newly acquired French territories. He was thrilled to encounter civilisations resembling the ancients as he knew them from literature. He produced over a hundred depictions of the scenery and people.

Across the 1830s Delacroix enjoyed many state commissions to decorate public buildings. This long series of often very large projects would involve painting the Church of Saint-Sulpice in Paris where he left several of his most accomplished pieces.

In 1862 Delacroix was part of the group of artists that established the Société Nationale des Beaux-Arts which, although discontinued shortly after his death in 1863, was the progenitor of several subsequent attempts at creating a comprehensive national academy of the arts.

It is very noteworthy that Delacroix benefitted from sustained institutional support across the entirety of his career. His eminence as a painter having been established very early with The Barque of Dante, Delacroix enjoyed the recurrent patronage of the state, which several times bought his masterpieces and gave him commissions. This good fortune endured from the rule of kings Louis XVIII, Charles X, and Louis Philippe I, across the Napoleonic Hundred Days and the brief Second Republic, to the imperial regime of Napoleon III.

A symbol of the revolutionary and patriotic spirit of France, Delacroix most famous painting was inspired by the popular revolt against King Charles X in 1830 after his regime had suppressed the freedom of the press. Its suggestive symbolism has made it easy for the subject matter to be confused for the Revolution of 1789 and, later on, the Revolution of 1848, both anti-monarchical uprisings which established short-lived democracies in France.

The painting was purchased by the royal government of King Louis-Philippe, who considered himself a ‘citizen-king’ due to his election to the throne after the people deposed Charles X. It would never be given a stable place at the Palais du Luxembourg, however, as it was excessively revolutionary to be displayed. It will return to exhibition in 1848, after the Republican takeover, and to the Salon in 1855. Finally, in 1874, it would become part of the Palais du Louvre.

The female figure in the forefront, leading the revolutionary charge, personifies France. It is shaped on the model of the Venus de Milo, discovered in 1820 and already stored at the Louvre. She wields the tricolour of 1789 with her right hand while on her head she wears the Phrygian cap symbolising the Jacobin ideals of freedom. On the horizon and to the left we espy the Notre-Dame Cathedral and thus recognise a precise context.

The distinctive chromatic contrast of Delacroix’s style is here accomplished with the juxtaposition of a commoner’s blue shirt and the yellow of the leading figure’s garb. Instead, the boy on the right armed with pistols contributes an achromatic opposition: the white of his bandolier with the black of his vest (the figure will inspire Victor Hugo’s Gavroche in Les Misérables). The young man on the left bearing a musk is Delacroix’s self-portrait, symbolising his act of painting for his country in substitution of fighting for it.

The lifeless figures in the lowest register of the foreground reproduce those of Géricault’s Raft of the Medusa, even though their livid countenance negates the idea that they are fresh casualties of the civil war.

The key lines giving structure to the composition are the vertical of Liberty traversing the painting and pointing upwards, and the oblique lines rendered by the corpses in the foreground, which bestow a sense of horizontal spaciousness.

The painting was inspired by the Ottoman aggression onto the people of Chios in 1822 which resulted in genocide and international outrage. Suggestively to the romantic mind, Chios was the island that legend held as the birthplace of Homer.

The gigantic painting began, according to Delacroix’s diary, with the figure of the suffering elderly woman on the lower right. The pathos of her condition gives credence to Baudelaire’s argument that in every Delacroix composition there is a figure which symbolises the whole. Her face directed upward and beyond the scene, communicates resignation to a terrible fate. The reddish coat over the darker shirt renders the distinctive contrast.

The affecting spectacle of a multitude of victims is richly developed. Most conspicuously the toddler on the left, trying to suckle his mother unaware that she is dead, and the statuary male on the left who appears to be dying, comforted by a woman but with the same look of dejection before fate.

The immense, inexpressive sky overhanging the massacre testifies to Delacroix’s study of the English masters of the landscape, but more concretely Giovanni Battista Tiepolo and the Venetians.

An example of Delacroix’s long-term projects and of his skill with the mural are his decorations of the walls and vault of the Chapel of the Holy Angels inside the Church of Saint-Sulpice in Paris.

Eugène Delacroix painted Old Testament subjects with a technique based on touches and a mixture of oil colours and wax. The visual effect is the diffusion of shapes. Jacob Wrestling with the Angel has the patriarch struggling with the angel who will reveal himself to be God, in an idyllic environment that Delacroix derived from his surroundings. A golden light pervades the scene; it was rendered with quick, separate touches of the brush. Opposite Jacob’s trial stands Heliodorus Driven from the Temple, a scene from II Maccabees. 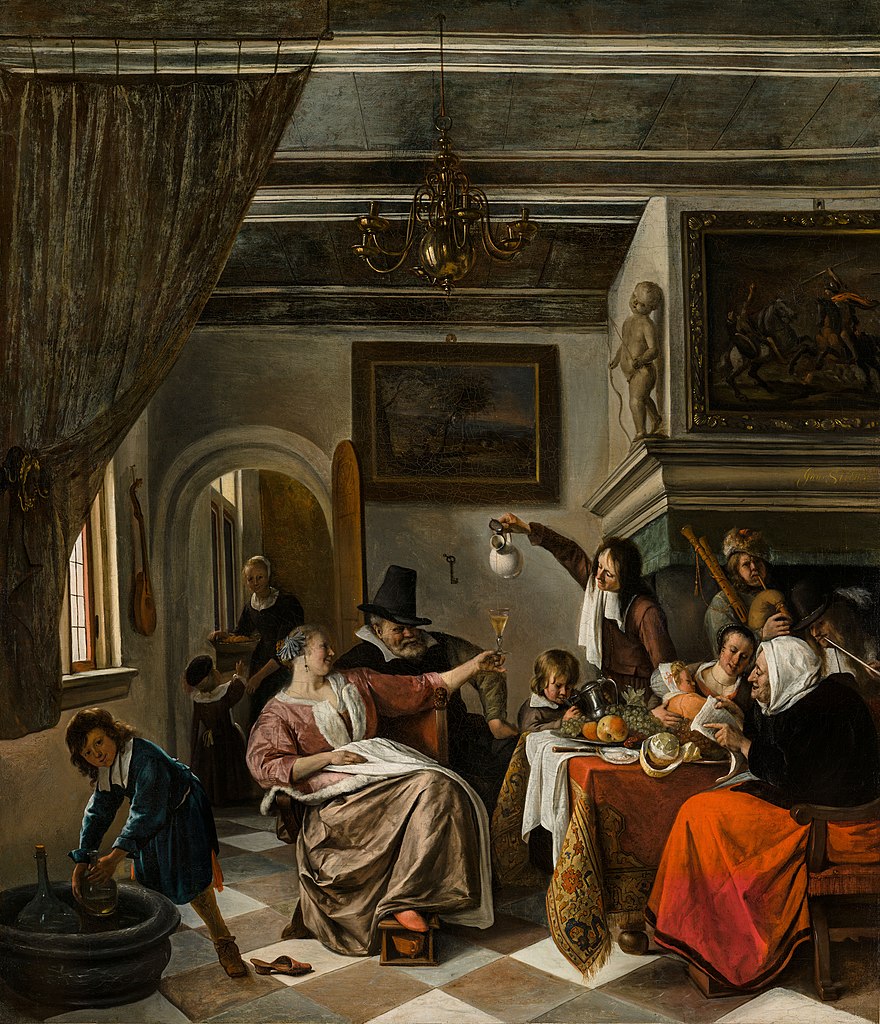 A Merry Family Feast is a 1661 painting by the Dutch Golden Age artist Jan Steen. This work is located in the Fabre museum in […] 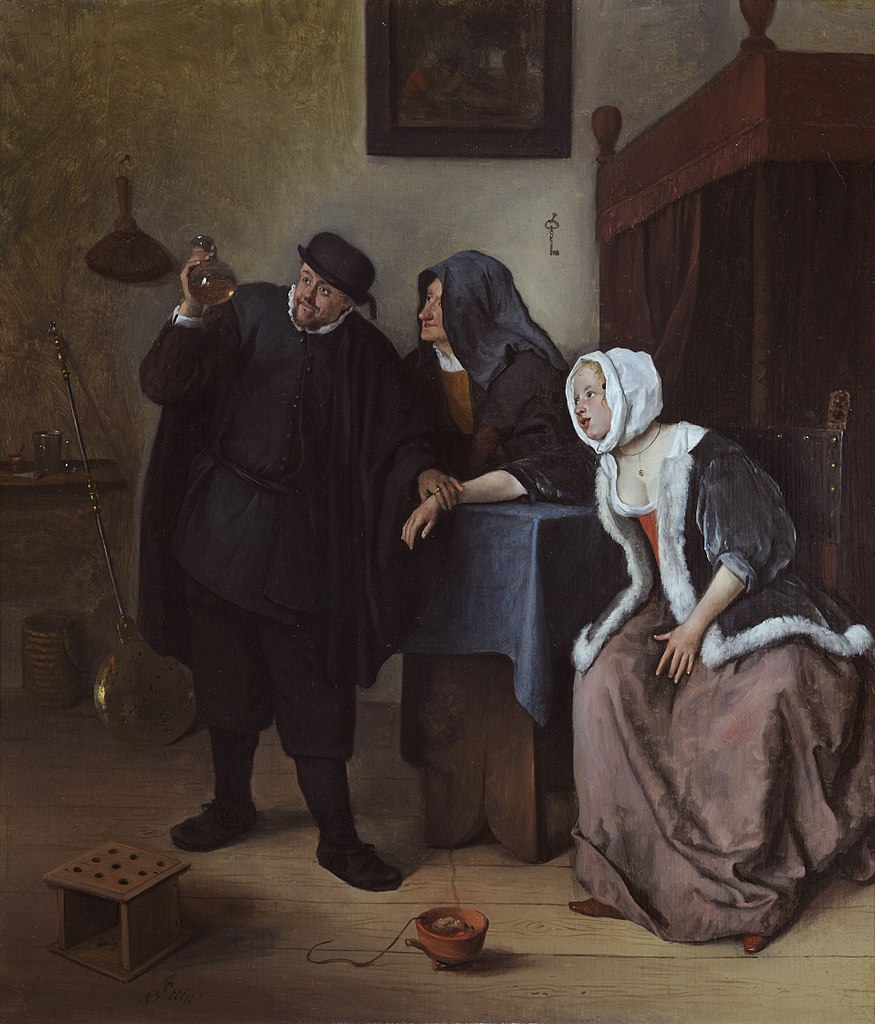 The Physician’s Visit is a 1664 painting by the Dutch Golden Age artist Jan Steen. This work is located in the Museum De Lakenhal in […] 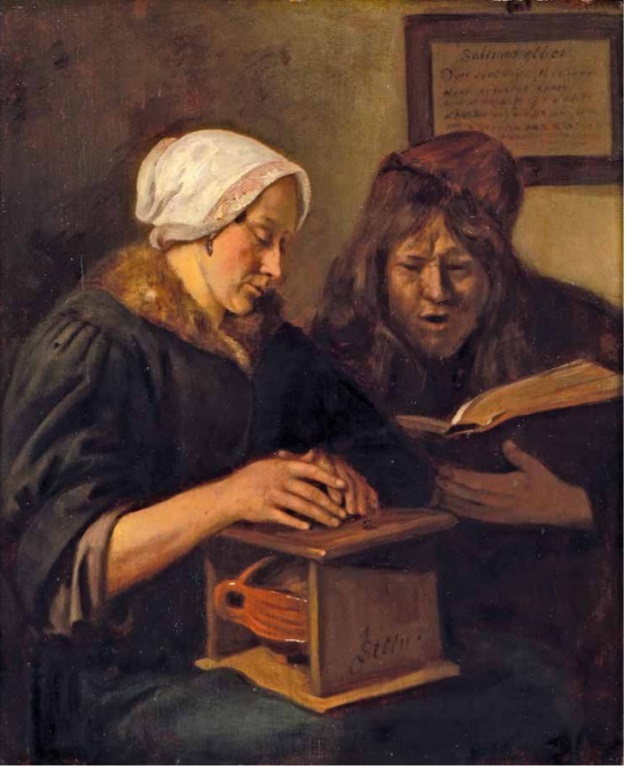