Alfred Sisley (October 30 1839—January 26 1899) is an exponent of the Impressionist technique and season. A British-French artist who never acquired his French citizenship but never resided in Britain for long, he is one of the less known Impressionists.

Sisley was born in Paris into a well-off British family; he would, however, die in relative poverty in a small town near Fontainebleau.

As if in imitation of the life paths of many other Impressionist artists, Sisley abandoned the professional studies that his father had intended for him — in his case within the silk trade — in order to pursue an education that would induct him into the arts. He, therefore, entered the prestigious École des Beaux-Arts.

The inner circle of the Impressionists

Sisley trained in the atelier of the classicist Swiss painter Charles Gleyre. This is where he first met Claude Monet, Pierre-Auguste Renoir, and Frédéric Bazille, the soon-to-be Impressionists with whom he would join the informal circle. The young artists began to paint together en plein air, with rich colours and broad canvases. Their attempts to gain acceptance at the official Salon were regularly rebuffed; there was no interest in the artistic-political establishment for their non-naturalist style.

Sisley, like Monet, enjoyed the financial support of a wealthy father in the 1860s, when the budding Impressionists were struggling to find room for their exhibitions, let alone to earn money from the sale of paintings, and many of them were impoverished. Sisley was also well established in the social circle of Parisian artists and intellectuals. At the Café Guerbois, the place of vociferous discussions, Alfred Sisley was a regular. This is likely where he made the acquaintance of Édouard Manet and all the other Impressionists.

Success at the Salon & Impressionist Exhibition

In 1868, Sisley won his first admission to the Salon (a few other admissions would follow). This did not measurably affect his career or style as it brought him neither income nor acclaim.

Sisley’s financial situation was upturned in 1870 when the Franco-Prussian war brought an end to his father’s silk business. For the rest of his life, Sisley would have to support himself from his sales and patronages. As a consequence, like most artists of his orientation, he too was impoverished. His travels to London and Berlin, from which he learned so much, were usually made possible by the largesse of patrons.

Alfred Sisley took part in the inaugural exhibition of the as-yet-unnamed Impressionist movement in 1874. Thereafter he began making brief excursions to Britain, the land of his ancestry but in which he never settled. (Sisley tried and failed to acquire French citizenship before his premature death in 1899.) Besides painting a series of landscapes in the wider London area, Sisley certainly surveyed the works of JMW Turner and John Constable, as their influence is perceived in all of his subsequent, essentially Impressionist, landscape paintings. In his British voyages, Sisley painted round the Thames and, after his marriage in Cardiff, in the area of Penarth, in southern Wales.

In 1880, Sisley relocated with his family away from Paris and to a small town (Moret-sur-Loing) near Fontainebleau. The amiable town and the nearby Forest of Fontainebleau became his subject matter. Here was occasionally joined by Monet and Renoir, who also appreciated the lush greenery of the Forest, which had been the inspiration for a previous generation of Realist painters.

Alfred Sisley is less noted than some of his Impressionist colleagues because of the sense of impersonality that his landscapes communicate. While a certain atmospheric authenticity is undeniably present in all of his works, the Impressionist technique appears to seek its own justification in his case. What is arguably lacking in his compositions is an emotional quality.

Sisley is for that reason sometimes compared to Monet, a friend, collaborator, and a fellow Impressionist. While the subject matter and the technique are almost identical, Monet paintings carry an impression of meaningfulness construed by colour and perspective which speak eloquently of the artistic mind at work.

In Sisley’s case, a pre-Impressionist phase suggests itself in counter-distinctions to that of proper Impressionism. Belong to the former are such early paintings as Avenue of Chestnut Trees at La Celle-Saint-Cloud of 1865. Rejected by the Salon of 1867, this landscape shows all the elements of Sisley’s personal interest: the ponderous but inexpressive sky, a modulated mass of trees across a single register, and the effusiveness of rich but scarce colours.

As formative influences upon Alfred Sisley, Turner and Constable have been pointed, though the precise moment of Sisley’s contact with their art is not known. Sisley was principally guided by the example of his Impressionist peers, above all others Monet, Manet, and Pissarro. He has clearly also studied the recognised masters Courbet and Corot.

The defining structural decision of this wintery landscape (one of Sisley’s favoured subjects) is the linear perspective. We are placed before a village street hemmed in by tall and irregular walls on both sides. The white of the snow dominates the lower half of the painting while the dark grey of the treetops and the thematic sky command the upper half. The walls contribute a yellowish hue while the distant female figure is a black blot at the centre of the perspective. These are all the colours that Sisley used in this painting.

The Impressionist touch and the en plein air origin do not obscure the fact that the compositional choice behind this painting was deliberate and meditated. The sprawling street represents a line traversing the midpoint of the canvas until it reaches the human figure situated almost at the centre. The irregular walls create two unambiguous sloping parallels which run inwards toward the centre. The geometrical and traditionalist guidelines are unambiguous. Sisley’s acquisition of English landscaping techniques is thereby testified.

“The sky cannot be a background only”, Alfred Sisley argued. “I lay stress upon this part of the landscape because I would like to make you understand the importance that I attribute to the sky. . . I always begin a canvas with the sky.”

The Supper at Emmaus: Jan Steen 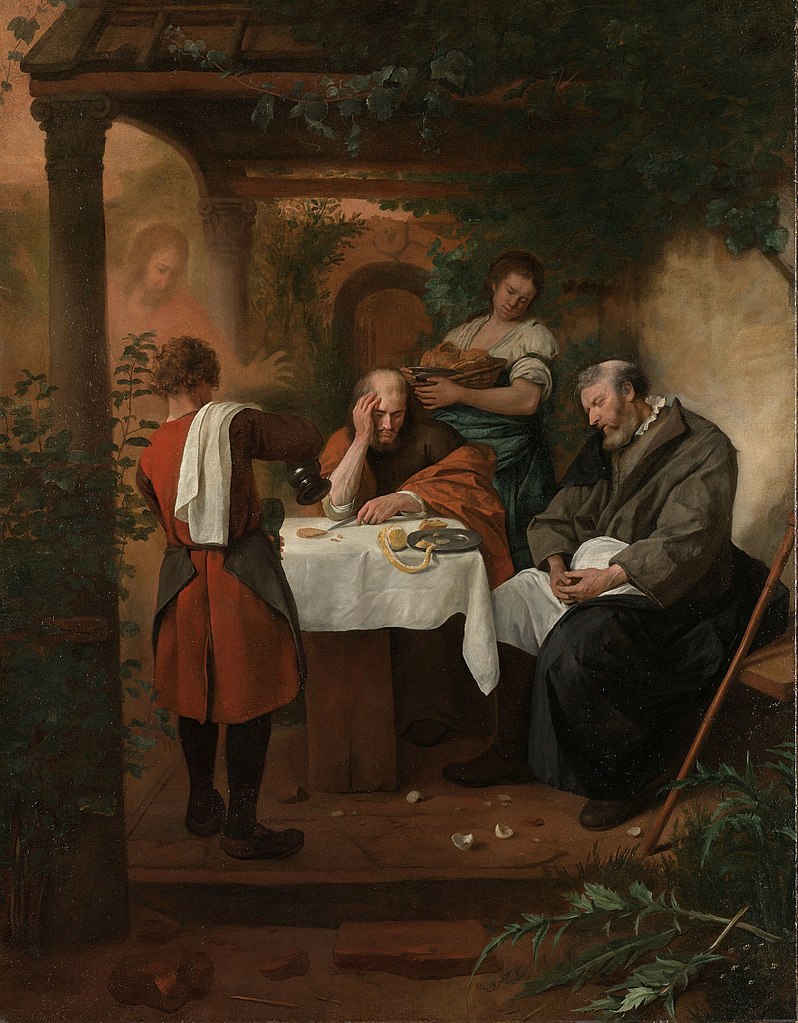 The Supper at Emmaus is a 1666 painting by the Dutch Golden Age artist Jan Steen. This work is located in The Rijksmuseum in Amsterdam, […] 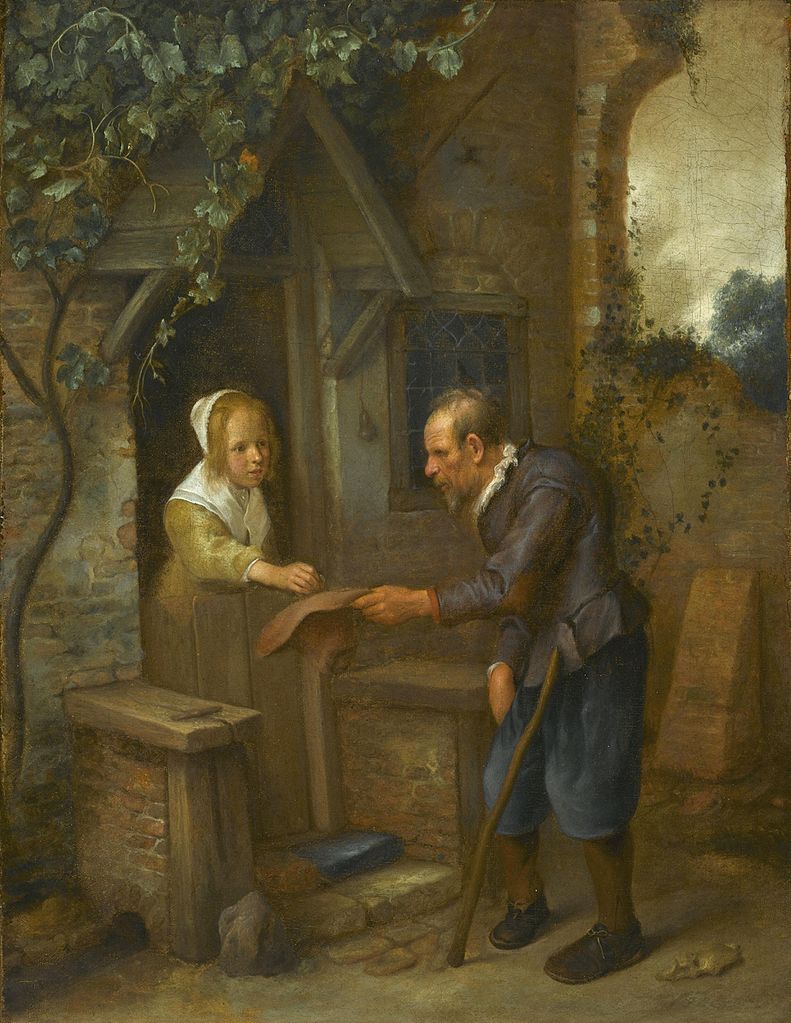 Young Girl Giving Alms to an Old Man is a 1658 painting by the Dutch Golden Age artist Jan Steen. This work is located in […]

The Death of Ananias: Jan Steen 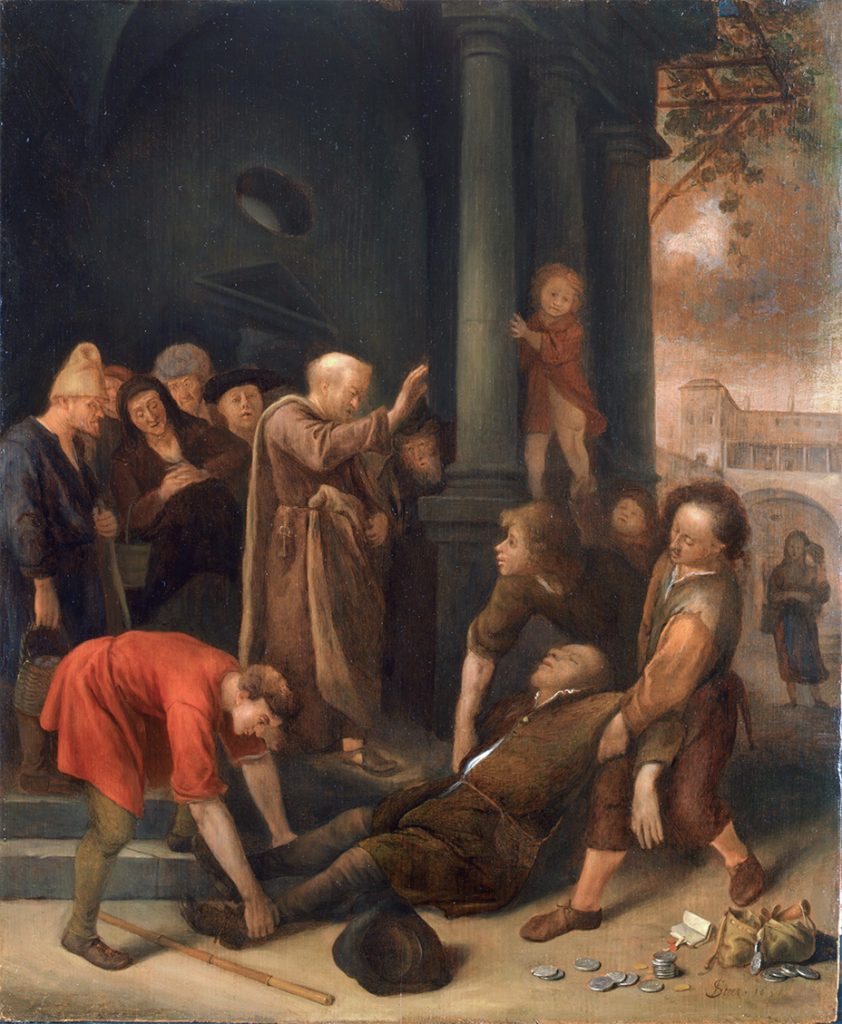 The Death of Ananias is a 1668 painting by the Dutch Golden Age artist Jan Steen. This work is located in a Private Collection. More: […]